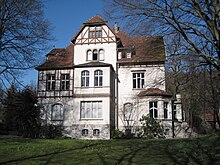 The Felsenmeer Museum is a local history museum opened in Hemer in 1989 . It is built in 1902, under monument protection standing Villa Grah in the district Sundwig housed and after the neighboring Felsenmeer been named. The museum gives an insight into the history of the sea of ​​rocks, where iron ore was mined more than a thousand years ago. Further topics are the industrial and urban history of Hemer.

The museum is supported by the Hemer Citizens' Association and Local History Association, which discussed the establishment of a local history museum as early as the 1960s. A suitable building and enough exhibits were only found almost 30 years later so that the museum could be set up.

In the area of ​​Hemer's industrial history, the Felsenmeer Museum focuses on mining in the Felsenmeer Hemer and metal processing. In addition to models and boards, a preserved racing fire stove is on display. A roll of wire and a brass movement can be seen as models. The museum operators also address the paper industry. Products from well-known Hemeran companies show the current industrial structure of the city.

In the area of ​​geological history, the focus is on the formation of the Hemeraner caves and the sea of ​​rocks. In addition, there are exhibits such as bone finds from the early and prehistoric times of the Hemer area.

The main focus of the city history ranges from a reconstruction of a Franconian grave from the 7th century to exhibits about National Socialism in Hemer. Essential parts of a coin find with over 3,500 individual pieces, which caused a sensation during excavation work in Westig in 1949 , are on display. Some exhibits are dedicated to the origins of the displaced .

The museum also provides information on the life stories of Hemeraner Friedrich Leopold Woeste , Willibrord Benzler and Hans Prinzhorn , among other things in the form of a Prinzhorn archive, which largely consists of copies.