The former municipality of Bösperde has been part of the North Rhine-Westphalian city of Menden (Sauerland) since 1975 .

Bösperde is located in the north of the Menden urban area on the border with Fröndenberg .

The Hönne flows past the place , which flows north into the Ruhr , which forms the city limit to Fröndenberg there.

The place used to be called Holzen. Holzen was renamed Bösperde on June 24, 1930, but for many years it was also referred to as Holzen-Bösperde. The name change was carried out, because the church on Aug. 1, 1929 Holzen from the district Hörde in the district Iserlohn was reclassified. There is also a village near Arnsberg-Neheim.

Today's district of Bösperde has grown together from several spatially separated settlement centers. The first is the manor house Kotten , first mentioned in a document in 1259. The Bösperder Höfe also go back to an originally uniform aristocratic residence, which can be found on the site of today's Kissingschen Hof; Between 1337 and 1410 several bearers of the name "von Bösperde" are documented. The Holzener Höfe Scheffer; Raw; Lehmkuhl; Schotenröhr; Kissmer and Wittfeld are loosely scattered in the area of ​​today's Dorf- und Provinzialstraße (B 515). The fifth and most decisive core of the settlement is non-peasant; it is the new rolling mill.

Before the municipal reorganization on January 1, 1975, Bösperde was an independent municipality in the former Menden district in the former Iserlohn district . With the incorporation, Bösperde became a district of the city of Menden (Sauerland). The last mayor was Friedrich "Fritz" Bücker.

The municipal coat of arms of the former municipality of Bösperde is divided into silver and red, above a black horse's head, below the " cow iron " of the Menden office . The horse's head was chosen as a folk etymological interpretation of the place name Bösperde ("bad horse"). 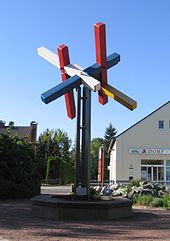 The federal highway 515 runs through Bösperde . On the north-eastern edge of Bösperde on the double- track Fröndenberg – Menden railway line is the “Bösperde” stop, which is served by the RB 54 Hönnetal Railway every hour.

In 2007 the shooting club Holzen-Bösperde-Landwehr 1857 eV celebrated its 150th anniversary and published a chronicle on the occasion. In this commemorative publication, the Catholic and Protestant parishes as well as the primary school are represented with their own contributions.