The title of this article is ambiguous. Further meanings are listed under Lucka (disambiguation) .

Lucka is a small town in the Altenburger Land district in Thuringia .

Lucka is located on the southern edge of the Leipzig lowland bay in the midst of a post-mining landscape that has been greatly altered by the lignite opencast mines of the Borna district (reforested dumps in the north, west and east and Lake Haselbach as an open pit ). In the north of the United Schleenhain opencast mine , lignite is still extracted. In the south of the city is the area of ​​the now recultivated Phönix-Ost open-cast mine , which belongs to the Meuselwitz-Altenburg lignite district. The Rainbach and Schnauder , which unite north of the old town, flow through the city . Lucka is the northernmost town in the Altenburger Land, which belongs to Thuringia, in the triangle of Thuringia – Saxony – Saxony-Anhalt.

Lucka includes the Teuritz district (merged with Lucka around 1914), the Lucka Forest and the districts of Breitenhain (incorporated on October 1, 1922) and Prößdorf (incorporated on March 8, 1994). 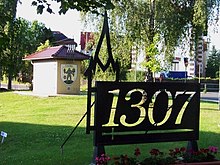 Memory of the battle in Lucka in 1307

Settlement of the area around Lucka can be traced back to the most recent Stone Age (around 5000 to 2500 BC). In the 12th century, Lucka probably gained importance from the neighboring Breitenhain Castle as a customs post for the rulers of the same name on the road from Merseburg and Pegau to Altenburg. It was probably donated to Grünhain Abbey in 1284 . Lucka is first mentioned in a document in the Naumburg appraisal register in 1320 as oppidum Luckowe .

1307 won the battle of Lucka Friedrich the Bitten von Wettin against Albrecht I von Habsburg and thus secured the rule of the House of Wettin in central Germany.

1875–1975 there was a rail link with Meuselwitz and Groitzsch . After the First World War, Lucka was increasingly involved in the Meuselwitz lignite industry.

In 1900 the Leipzig corrugated paper factory Gräßle, Laupitz and Co. was founded, which started producing in Lucka in 1903. After the company was sold by the Treuhand in 1991, new halls were built. The number of employees grew again to 200 employees.

The “Deutsches Haus” inn housed 50 forced laborers who were employed by the farmer Jahr, on the Teuritz manor and by the Moll & Sons company. Soviet prisoners of war were committed to forced labor on the Breitenhain domain , two of whom died in 1941.

Lucka was the target of a US bomb attack on January 16, 1945 . There were 12 deaths and building damage. On April 7, 1945, the place was again occupied with high explosive bombs.

During the second district reform in the GDR in 1952, the existing states were dissolved and the districts were redesigned. Thus Lucka came to the district of Leipzig with the Altenburg district . Around the city of Lucka, which lay between the Borna lignite district in the north and the Meuselwitz-Altenburg lignite district in the south, numerous open-cast mines were built after 1945. a. the Schleenhain and Groitzscher Dreieck opencast mines in the north and Phönix-Ost and Falkenhain in the south. As a result, a large part of the Lucka Forest was destroyed. After the recultivation of the remaining holes, numerous lakes are to be created in the vicinity of Lucka, such as the Groitzscher , Prößdorfer and Haselbacher See .

Since the local elections on May 26, 2019, the city ​​council has been composed as follows:

Blazon : “In gold, an armed knight in steel blue armor with an open visor standing on green ground. The knight holds a black cross in his outstretched right hand and a stemmed rose in his left hand; he is accompanied on the right by a heraldic shield, which shows a red rose with a golden stem and green sepals in a silver field. "

The coat of arms appeared for the first time in 1431 as a city seal, in which the knight wore a scourge instead of the rose. Since the 17th century the rose of the Altenburg burgraves was used as the city's coat of arms. The coat of arms was replaced in 1951 by a new coat of arms depicting a worker with a sledgehammer. However, after the political change, it was replaced by the old one.

The flag of the city of Lucka shows the colors blue - gold (yellow).

Between 1874 and 1993 Lucka was connected to the Gaschwitz – Meuselwitz railway . After tourist traffic was stopped on September 27, 1976, freight traffic continued on the Lucka – Meuselwitz section until May 23, 1993.

The city is part of the Central German Transport Association and is connected by the THÜSAC local passenger transport company with two PlusBus and other regional bus routes.

Lucka is located on state road 1350 , which connects federal road 180 in Meuselwitz (south) and federal road 176 in Groitzsch, Saxony (north).

City church from the south

Particularly noteworthy is the Luckaer Markt with the town church Sankt Pankratius , which was first mentioned in 1396 and rebuilt in the middle of the 17th century. In 1891 it got a new tower, which today gives it a height of 56 meters. There is also the Wettiner fountain with its lion statue from 1908. In the district of Prößdorf there is a manor with a historic entrance gate, outbuildings and several steles carved in stone. A 7.5 km long circular route connects Lucka with Prößdorf, which is characterized by its low-traffic, scenic route.

In the list of cultural monuments in Lucka , all listed buildings in the city area are listed.