Löbichau is a municipality in the Altenburger Land district in Thuringia . It belongs to the administrative community of Upper Sprottental .

Löbichau is the westernmost municipality in the Altenburger Land district. The Großensteiner Sprat flows through the municipality . The municipal area is assigned to the edge of the Altenburg loess area according to the natural spatial structure of the state of Thuringia . The municipality lies at the transition to the Ronneburg arable and mining area . Most of the community area is used for agriculture. The next towns are Schmölln (4 km east) and Ronneburg (4 km southwest).

Neighboring communities are the town of Schmölln and Posterstein in the Altenburger Land district, as well as Großenstein and the town of Ronneburg in the Greiz district . 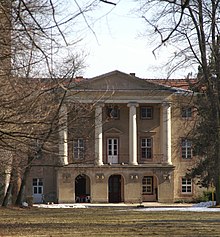 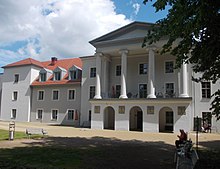 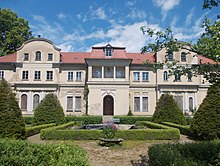 After the Second World War, the uranium ore mining of the SDAG Wismut developed in the region . During the second district reform in the GDR in 1952, the existing states were dissolved and the districts were redesigned. Thus, the community Löbichau came with the county Schmölln to the district of Leipzig , which since 1990 belonged to the district Schmölln to Thuringia and the Thuringian district reform in 1994 opened Altenburger in the district of the country. From February 1, 1992 to October 11, 1994, the community belonged to the administrative community Löbichau-Wildenbörten , which became part of the Oberes Sprottental administrative community on October 12, 1994 .

A moated castle was built in the middle of the swampy terrain, which later became a manor and was first mentioned in the 13th century. Until 1360 the property belonged to the Lords of Swentz. In 1494 the lords of Ende and from 1619 the lords of Einsiedel were the owners. The von Hoym family bought the property in 1730.

In 1794 it was bought by the Duchess Dorothea von Kurland , who had a classicist castle built on the foundation walls of the castle from 1796 to 1798. An English landscape garden surrounded the castle and the smaller Tannenfeld Castle was built in the Baroque style in the neighborhood . Both palaces together formed the “Musenhof Löbichau” with visits from important political and cultural personalities. The Russian Tsar Alexander I visited the place in 1808 to thread a connection with the family of the French Foreign Minister, the Talleyrand-Périgord ; At his mediation, one of the four daughters of the Duchess Talleyrand's nephew married the following year. Guests were also the King of Prussia , Napoleon , Metternich , Goethe , Schiller , Gottfried and Theodor Körner . After the Duchess's death in 1821, the property fell to her daughter Johanna Katharina Princess Biron of Curland (1783–1876), married to Francesco Pignatelli, Duke of Acerenza. After her death in 1876 it fell to her niece Luise von Tümpling nee. von Boyen, daughter of General Leopold Hermann von Boyen and his wife Franziska geb. Princess Biron of Curland. In 1886, a Körner room was set up in the castle, in which the close relationships between the Duchess and the freedom poet Theodor Körner were documented.

Mrs. von Tümpling donated the castle in 1908 as Johanna-Luisen-Stift of the German Aristocratic Association , which ran a women 's monastery there and until 1930 also a housekeeping school. The school was affiliated with the Reifensteiner Verband since 1908. Freya von Moltke , b. Deichmann attended school for one year from April 1928.

After 1945, the Gera district opened a retirement home there, and from 1951 it was used as the administrative center of the Schmölln district.

The classicist main building, which was demolished in 2009, was replaced by a new building serving as a retirement and nursing home based on the historical appearance.

Development of the population in the years 1933 to 1939. The figures relate to the territorial status of 1939:

Gatehouse, today the seat of the municipal administration

Blazon : “Half-divided and split; above in red the golden flower of the sunflower, the stamens through a golden diamond lattice in black, in front below in black silver hammer and mallet and behind in gold a red, golden crowned, black armored lion. " 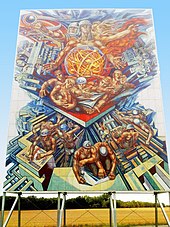 Large picture "The peaceful use of nuclear energy" by Werner Petzold 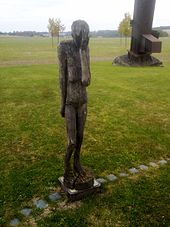 “Mourners” in the sculpture park

The parts of the castle in Löbichau used by the municipal administration are in good structural condition, while the main building was demolished in 2009 in order to build a new home for the elderly. The vacant castle in Tannenfeld has not yet been reused.

An official accompanying program of the Altenburger Land district to the Federal Horticultural Show 2007 was the exhibition Resurrection Aurora (i.e. Resurrection Dawn) with the Löbichau winding tower of the former shaft 403 and a lime tree avenue for pedestrians and cyclists to the renovated Beerwalde dump , which can be walked up to the top of the mountain. On September 5, 2009, the large picture “The peaceful use of nuclear energy” by Werner Petzold , a work of Socialist Realism originally on the gable of a bismuth building in Paitzdorf , was inaugurated again between the heap and the tower. At 12 meters wide and almost 16 meters high, it is probably the largest free-standing picture in the world. The sculpture art park "Human Dimensions" was created directly under the winding tower.

Headframe shaft 403 - industrial monument in the community of Löbichau

In Beerwalde, the Beerwalde – Drosen line, operated by the Wismut-Werkbahn , branched off to Löbichau and Drosen from the Meuselwitz – Ronneburg line . Both railway lines are closed for passenger traffic. Only the section from the Kayna sand pit near Naundorf to Raitzhain is still used by freight today. The Gößnitz – Gera railway runs past the community in the south. The closest train station is in neighboring Nöbdenitz .

The presence of uranium ores in the Ronneburg region was already known at the end of the war in 1945. For the dismantling, the state stock corporation of the non-ferrous metal industry Wismut was founded in Moscow in 1947, with its headquarters in Aue . The company and uranium ore mining were under Soviet leadership from the start.

During the expansion of geological investigations by the SDAG Wismut, renamed on January 1, 1954, uranium ore deposits in Löbichau-Drosen were detected in 1975 . Wismut then began planning and building conveyor systems and the railway connection ( Beerwalde – Drosen railway line ) for the removal of the conveyed goods. It originated with the shaft 415 of the most modern mining towers in Europe and a multi-track freight yard, which was taken to start reducing in 1978 in operation. The uranium mining began in 1982 and was discontinued after the reunification of the 1990th After the end of the Soviet participation in 1991 according to the German-Soviet State Treaty, a Wismut GmbH was founded as a company of the Federal Republic, which was entrusted with the liquidation or shutdown of operational facilities and the renovation and recultivation. Through the influence of the citizens and their municipal representatives, it was possible to preserve the headframe of shaft 403 for the community of Löbichau as an industrial monument. 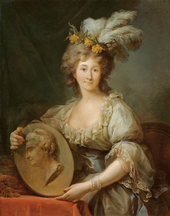 The Löbichau manor and Tannenfeld Castle had been owned by the Duchess Dorothea von Kurland since 1794 . Because of the frequent presence of European rulers of that time and German intellectual greats, the castle is known to this day as the court of muses of the Duchess of Courland .