The title of this article is ambiguous. Further meanings are listed under Treben (definition of terms ) .

Treben is a municipality in the Altenburger Land district in Thuringia . It is the seat of the Pleißenaue administrative community and is located about eight kilometers north of the district town of Altenburg .

The community extends to the right and left of the Pleiße with the Gerstenbach tributary and is located in the flood area, so the consequences of the floods in 2002 were devastating, the main town was almost completely under water. The first flood protection dams were already built in 1839, but they did not bring the necessary success, so that the Windischleuba dam had to be built between 1951 and 1953 . Today it no longer serves to protect against flooding, and it is increasingly silting up. Since the neighboring town of Thräna moved to the Saxon district of Borna in 1952 , the town has bordered on Saxony .

The place is first mentioned in 1181 as a Sorbian place. The manor is first mentioned in 1329, at that time it was most likely a moated castle . The current building was erected in 1543 and today houses both community and association administration. Treben's church in the immediate vicinity of the manor house was built in the second half of the 15th century and contains a Kreutzbach organ from 1862.

Due to the lignite mining in the south of Leipzig, a pottery factory was built in Plottendorf in 1854, and in 1821 the mining of a 10 meter thick lignite seam began in Serbitz. There are four memorial sites in the community that commemorate those who fell in World War I in Treben, Serbitz, Plottendorf and Lehma.

In the district Plottendorf were 33 in a warehouse in 1942 forced laborers housed in the Schwelwerk Regis had to work.

During the second district reform in the GDR in 1952, the existing states were dissolved and the districts were redesigned. Thus Treben came with the reduced circle Altenburg to the district of Leipzig . The neighboring town of Thräna in Treben was separated from it by the reform and assigned to the Borna district, which ended its historical connection to the Altenburger Land and Thuringia. However, Thräna remained ecclesiastically connected to the Evangelical Lutheran Church in Thuringia and its parish church in Treben. Today Treben is part of the Evangelical Lutheran Parish Altenburg-Rasephas - Altenburg-Zschernitzsch - Treben of the Evangelical Church in Central Germany .

With the re-establishment of the Free State of Thuringia, Treben has belonged to it again since 1990. If the place was in the Altenburg district since 1990, it came to the Altenburger Land district with the district reform in 1994.

Plottendorf and Primmelwitz came to the community on July 1, 1950. Serbitz was incorporated on May 1, 1965. Lehma and Trebanz, which were spun off from the city of Meuselwitz, were added on December 30, 2008. 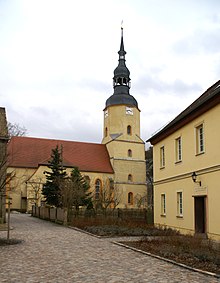 The composition of the local council was elected in the local elections on May 25, 2014 in a majority vote. All local councils belong to the CDU parliamentary group.

In the listed ensemble of the former Treben manor , which includes two other buildings in addition to the manor house, cultural events take place regularly, such as B. concerts, cabaret, book readings, lectures and exhibitions. It is also the seat of the Pleißenaue administrative community . The northern part of the manor house was originally a castle complex of the burgraves of Altenburg . For the restoration and use of the manor house, the municipality of Treben received the Thuringian Monument Protection Prize in 2006 in the "Recognition" category. The manor can be visited on event days and on request.

Treben is connected to the S-Bahn network of Central Germany via the Treben-Lehma stop on the Leipzig – Hof railway line . The S5 trains run every hour between Zwickau , Altenburg , Leipzig and Halle (Saale) . The federal road 93 leads through Treben and Serbitz .

Treben is the seat of a state regular school (middle school).