This article deals with the community of Fockendorf in Thuringia. For the district of the same name in Schleswig-Holstein see Beidenfleth .

Fockendorf is a municipality in the Altenburger Land district in Thuringia . It belongs to the administrative community Pleißenaue .

The main town of Fockendorf is located in the northeast of Altenburger Land on the state border with Saxony, around seven kilometers north of the district town of Altenburg and around 30 kilometers south of Leipzig . The federal road 93 runs through the neighboring town of Treben .

The main town of Fockendorf includes the locality of Kleintreben , which is located immediately to the northwest, and the district of Pahna, which is about 1.5 kilometers to the east . 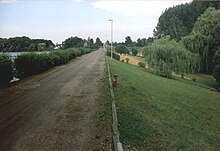 Fockendorf is located in the Pleiße valley . The river is dammed by the Windischleuba dam just south of the village . After the end of lignite mining , the Pahna bathing lake with an area of ​​around 220 hectares was created as a local recreation area.

Paper mill as seen from the Windischleuba dam

In the year 1272 Fockendorf was mentioned for the first time, the district Pahna however already in 1227. In 1445 the place consisted of 15 farms. In contrast to the surrounding settlements, the place name is of German origin and means something like "village of Vokko". Ecclesiastically, Fockendorf belongs to the parish of Treben . The village is affected by the Pleiße and in 1445 a mill was first mentioned in a document.

On July 1, 1950, the previously independent municipality Pahna was incorporated.

From 1692 to 1995 there was a place in the paper mill , with the commissioning of a 1861 paper machine for paper mill was. The supply of raw materials and the sale of their products took place via a cable car almost two kilometers long and built in 1898, which established a connection to the Leipzig – Hof railway line and the remains of which can still be seen in the area today. In 1946, the factory, which had also included a lignite mine in Pahna since 1880, was completely dismantled by order of the Soviet military administration and taken to the Soviet Union as a reparation payment . However, operations continued and in 1949 a paper machine went back into operation. After the factory was closed in 1995, the Fockendof community took over the company premises. In 2000 and 2001, a large part of the factory building was demolished; the remaining buildings now house the fire station of the volunteer fire brigade , several companies and a local history and paper museum, which also includes a small hydropower plant. At the time of National Socialism, 60 foreign prisoners were used as slave labor in the paper mill and in the surrounding farms . Since 1952 Fockendorf was the seat of an agricultural production cooperative .

Since the election on June 27, 2004, Karsten Jähnig has been the mayor of the volunteer fire brigade's list. He was confirmed in office in 2010 and most recently in 2016 with a majority of 99.5% with a turnout of 59.1% (−1.6% p). The result came about because there were no opposing candidates and only two eligible voters submitted their own nomination. The previous mayor was Dietrich Bauer, who was also on the list of the volunteer fire brigade.

The place is important for tourism in the district due to its location at the Windischleuba dam and the Pahna recreational area .

As a technical monument, the former paper factory now houses the Fockendorf Local History and Paper Museum , operated by the traditional association Papierfabrik Fockendorf eV Among other things, it has a handcraft and a collection of original hand-made paper from the 16th century. Furthermore, an experimental paper machine from the former engineering school in Altenburg , which the students used to carry out experiments, is in operation. With additional equipment such as a turbo- pulper ( pulper ), a steep cone mill, a number of hand-made paper , water containers and a calender , all essential components for paper production are available.