This article deals with the church; for the ship named after this see Rositz (ship) .

Rositz is a municipality in the Altenburger Land district in Thuringia . In the course of its history, the place was mainly characterized by lignite mining ( Meuselwitz-Rositzer lignite area ). The tar lake and the water tower, which was built in 1917 by the Deutsche Erdoel-Actiengesellschaft DEA , and the Rositzer coat of arms, in which a miner is depicted , are still reminiscent of this .

Rositz is located five kilometers northwest of Altenburg in Thuringia in the Leipzig lowland bay . It is the seat of the administrative association Rositz .

Rositz was first mentioned in a document in 1181. The village was laid out as a Rundling . The place name, around 1200 Rosiz , around 1215 Rodesicz , is possibly of Sorbian origin. In the 13th and 14th centuries, the burgraves of Altenburg owned the place. Later Rositz belonged to the Wettin office of Altenburg , which from the 16th century onwards was under the sovereignty of the following Ernestine duchies due to several divisions during its existence : Duchy of Saxony (1554 to 1572), Duchy of Saxony-Weimar (1572 to 1603), Duchy of Saxony- Altenburg (1603 to 1672), Duchy of Saxe-Gotha-Altenburg (1672 to 1826). When the Ernestine duchies were reorganized in 1826, the place came back to the duchy of Saxony-Altenburg. After the administrative reform in the duchy, Rositz belonged to the eastern district (until 1900) and to the Altenburg district office (from 1900).

Through lignite mining, the occurrence of which was first mentioned in Fichtenhainichen in 1672, and the associated industrial settlements, Rositz developed from a rural village to a large industrial settlement in the course of the 19th century. Along with Meuselwitz, Rositz is one of the namesake of the Meuselwitz-Rositzer lignite mining area . In 1872 the first Thuringian briquette factory and the Rositz sugar factory opened , which had the first electrical lighting in Germany. Further refining plants in Rositz were a Schwelerei (1918–1990) and the tar processing plant. The latter belonged to Deutsche Erdöl-AG ( DEA ), with which in 1917 the first carbochemical operation of large-scale industry settled in the Rositz area. There were several underground pits and several smaller opencast mines around Rositz .

From 1918 Rositz belonged to the Free State of Saxony-Altenburg , which in 1920 became part of the State of Thuringia . In Rositz itself, in the then still independent community of Gorma and in Pöppschen , the first known application of direct community democracy occurred in early 1919. In Rositz, 505 of the 988 eligible voters succeeded in increasing the number of council members for the elections on March 2, 1919 from nine to twelve. The same subject was the case in Gorma, although the number of supporters there is unknown. Rositz has belonged to the Altenburg district since 1922 .

The outdoor swimming pool, which is on the Schelditzer Flur, but was built by the municipality of Rositz, dates from 1934.

During the Second World War , eight camps for slave labor were set up in and around Rositz (Rositz I-VI, Untermolbitz and Schelditz ), in which more than a thousand slave laborers had to work: for Deutsche Erdöl AG (DEA) , for the Rositzer sugar refinery , at the company K. Eisenrieth , for the Rositzer coal works and for the company Curt Plützsch . Rositz is probably the place in Altenburger Land that was most destroyed in World War II. On August 16, 1944, the Deutsche Erdoel-Actiengesellschaft (DEA) was hit so badly that a cloud of smoke could be seen several kilometers above the ground for days; about 70 percent of the work was destroyed. Another bomb attack on the plant took place on February 14, 1945. A total of 49 people died in both attacks.

Time of the GDR

Reparation payments were also made to the Soviet Union from the Rositz community . The second track on the Zeitz – Altenburg railway line and the Altenburger Kohlenwerke briquette factory in Untermolbitz were dismantled. In addition to lignite mining, agriculture was also a major employer in the area. The LPG German-Soviet Friendship cultivated more than 1000 hectares of land with 187 employees. In 1952 the Kulturhaus Völkerfreundschaft , today's municipal administration, was built. In the same year Rositz came to the Altenburg district in the Leipzig district .

In the 1980s, it was planned to resume lignite mining in the Meuselwitz-Rositzer lignite district , but this was not carried out. A large part of the municipality of Rositz, including its districts, should have given way to the planned “Meuselwitz opencast mine” between Meuselwitz and Rositz.

In 1990 Rositz came back to Thuringia with the Altenburg district. Since 1994 the place has been in the Altenburger Land district.

The council Rositz is made since 2014 no longer of 16 women and men, but only in 14 and the Mayor. This office has been held by the non-party Steffen Stange since 2006, who was re-elected in the 2018 local elections with 99.9% of the valid votes. Only one person wrote their own candidate on the ballot paper. The council is composed as follows:

The evangelical village church is the most clearly visible building in the village because of its distinctive church tower. It dates from 1516 and is in the late Gothic style. It was restored in 1877, 1964 (inside) and 1994. 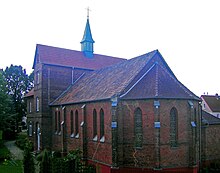 Mother of God of Mount Carmel

The Catholic parish church of Our Lady of Mount Carmel is located just outside the center of the village . The church was built from brick in 1901 after more and more workers from Poland and Bavaria came to the community. The building is less imposing in the neo-Gothic style; so a distinctive church tower was dispensed with.

The landmark of the place is the 41.5 meter high water tower from 1917. It served to supply the tar processing plant. The former culture house, today's municipal administration, also belongs to the former tar processing plant. Most noteworthy is the 38 meter wide front building with a flat hipped roof and five-axis entrance portal; this is followed by a wing with a stage.

In the Heimatstube the Heimatverein has its domicile and houses an exhibition on the history of the place as well as a hall with historical cinema technology. The half-timbered house was renovated in 1997 by the municipality. The actual Rositzer Heimatmuseum is the Heimatscheune, a side building of a four-sided courtyard. It was renovated in 2005 and 2006.

The so-called Bernsteinhof, a listed Altenburg four-sided courtyard , is used, among other things, for community events. The house built in 1704 still has a plank room.

In the historic industrial area of Zechau-Ost there is the Rositzer sugar factory , which was built in 1871 and was the first factory in Germany with an electrical connection. There is also the turbine house with complete inventory.

Big events in the place are for example the four-day Rositzer Kirmes or the Rositzer Sporttage .

The community also has an outdoor swimming pool, a bowling alley, three sports fields, two gyms, a youth club, a library and a meeting place for women.

Rositz is on the B 180 from Altenburg to Zeitz . The Zeitz – Altenburg railway runs almost parallel, although passenger traffic was discontinued in December 2002.

In the first half of the 19th century, lignite mining began in the Rositz area . The development accelerated so much that in 1865 there were already 11 pits, in 1873 the first briquette press was installed in what is now Gorma, and by the turn of the 20th century large parts of the Rositzer corridor were already exhausted. The last mine did not close until 1952.

Due to the war economy in the First World War , which required autarky , the Deutsche Erdoel-Actiengesellschaft (DEA) opened a lignite refining plant in Rositz in 1917 for the production of diesel oil . The plant, which as VEB Teerververarbeitungwerk Böhlen Rositz part of the plant employed over 1,600 workers around 1975, processed mainly brown coal tar into electrode coke ( Söderberg electrode ) and heating oil and diesel until 1990 .

In part of the Rositzer sugar factory, which became part of the VEB Zuckerkombinates Zeitz , part of the VEB Hartpapierwerk Groitzsch , today's Thuringian Fiber-Drum GmbH , was established in 1965 . The VEB Energieversorgung Leipzig - Altenburger Landkraftwerke was also located here. The briquette factory of pit 113 became the VEB Braunkohlenwerk Rositz , which in 1968 became the VEB Braunkohlenkombinat Regis operating part Rositz .

Today only small and medium-sized companies are located in Rositz, such as the Thuringian Fiber-drum GmbH and the window and door manufacturer Pax , both in the former sugar factory.

After the political change began, the soil of the tar factory premises, which was contaminated with various organic substances, began. The largest contaminated site, the tar lake , has been rehabilitated step by step since 1998. Since the work had to be carried out with particular care due to environmentally damaging influences, the renovation took a long time. In 2008, the filling of the remaining hole could begin. This was followed by renaturation , with subsequent fencing of the area. The work was completed in 2012. It was not until 2014 that planning work began to contain the groundwater contamination in the Schelditz district, which has been known for years and which pollutes the indoor air in many houses.

In Rositz, some clubs have made a good name for themselves at the regional level and in some cases beyond. The largest club is SV Rositz, which, in addition to football, also offers judo , bowling , artificial cycling , athletics and volleyball . In football, SV Rositz has been playing in the regional league since 2008, formerly the regional class. Rositz is also actively represented in various leagues in bowling. A modern four-lane system ensures a suitable sporty environment. In recent years, the athletics department has also established itself in Rositz. The main focus there is on promoting young talent, and this with considerable success, as proven by several state championships and other successes. Something similar is aimed at in judo, where one can refer to the first small successes.

Every year the Rositzer Sports Days offer a variety of sports over three days. Traditionally, a soccer tournament is part of the event.