A Celtic cross , high cross or Irish cross is an element of medieval sacred art in the Celtic cultural area of ​​the British Isles and Ireland ( Cornwall , Ireland , Isle of Man , Scotland , Wales ). It is a bar cross with an extended support beam ( Latin cross ), mostly carved from stone, with a ring around the intersection of the beams. In heraldry , this form, which has spread to Sweden (Midsummer Cross), is known as the wheel cross . The original Irish high crosses were not found on grave sites, but rather marked decorative areas or holy lands. They were also regional social gatherings around which celebrations were held.

Celtic cross as a tombstone

The preforms are simple crosses cut into menhirs . They are most common on the Dingle Peninsula in County Kerry . In the oldest Irish crosses ( cross-slabs ) in Carndonagh and Fahan , in County Donegal , the ring is missing, which only appears in the crosses of Ahenny (8th century) and Moville (Cooley Cross) and in the 12th century ( Dysert O ' Dea , County Clare ) disappears again, but is still common on grave crosses today. A formal approach to the real Celtic cross is the raw Keerogue Cross in Errigal in a cemetery in County Tyrone . A development towards the Celtic cross is perhaps also the undated cross in the cemetery of Noughaval (Clare) (Co. Clare). Especially the early Irish crosses (from Carndonagh and Fahan Monastery - 7th and 8th centuries) but also the somewhat later Welsh “Pillar crosse” ( Neuadd Siarman ) are decorated with knot patterns in many variations. On some crosses there are also images that do not fit into a Christian context, such as mounted Celtic warriors.

The High Crosses of Ireland are divided into regional groups (Barrow Valley, Midlands, Nordleinster, Ossory and Ulster). Groups of figures, such as those shown particularly well on the Ardboe and Donaghmore Cross in County Tyrone , later become typical. Only crosses made after the 9th century often show biblical scenes (Kells, Clonmacnoise south cross), some of them are purely ornamental. The high crosses erected before this time only show Irish-Celtic patterns and symbols. The highlight of the visual arts is the Muiredach Cross from Monasterboice, Co. Louth . A stylistically completely different and probably most beautiful of the preserved high crosses is that of Moone in County Kildare . The design with animals and birds is likely to go back to ideas in the Gaelic-Celtic area before Christianization . The late crosses (12th century) still have the ring in the ornamentation, but no longer in the contour. Sometimes the ring is close-fitting, but more often it is slightly set off with quarter-circle openings. It often has a reduced cross-section compared to the cross beams. The ornamentation of the cross itself is usually framed and was apparently only chiseled onto the prepared surfaces of the stone after the cross was erected. The “unfinished Kells cross” refers to this approach. The vertical bar can become thicker downwards or have a base. The Irish distinguish between ordinary Celtic crosses and Celtic high crosses in that the latter are ornamental and at least 800 years old.

Occurrence in Ireland and Great Britain

Stone monuments are also part of early Christian commemoration in the British Isles . Scotland has important stones from the early days of Christianity. These include the high crosses of Iona and Kildalton from the late 8th century. Various sculptural styles are assigned to the peoples of early medieval Scotland, Picts , Scots , British and Angles .

The Picts lived in the north and east of Scotland . Before creating free-standing crosses, the Picts selected large stone tablets, which they decorated against the background of the cross ( cross-slab ). Although Pictish symbolism was compatible with Christianity, it was never placed on the cross. In the late 8th and 9th centuries, stones with Christian motifs appear next to the Pictish symbols. They show that the Picts had now found access to Christian iconography. The biblical story of David was a favorite of the depictions. It is impressively designed on the stone shrine of St. Andrew. Motifs such as Daniel in the lions' den or Paul and Antonius breaking bread in the desert also appear.

Cross stones were also preferred by the British at Strathclyde and Galloway, while the Argyll Scots and the Angles in southeast Scotland preferred free-standing crosses. The high crosses on Iona and Islay show the connection between Irish, Pictish and Northumbrian elements, while the magnificent Ruthwell Cross in Dumfriesshire, with its Latin and runic inscriptions, is a highlight of early medieval European art.

The ring cross is also known from Sweden, where it can be found on Gotland as a triumphal cross and otherwise as a midsummer cross . The six-leaf star pattern on the Scottish cross-slab Cladh a'Bhile also has its counterparts on Gotland . The "Sueno's Stone", a Scottish stone with Nordic motifs, which is said to be named after the Danish King Sven (fork beard), also points to this connecting line.

Round tower and cross of Kells

Outside of the British Isles , this cross shape is rarely found, but there are numerous French examples from the coast of the Pays de Caux ( Veules-les-Roses , Saint-Pierre-en-Port , etc.) to Brittany ( Lanvallay , etc.) as well on hiking trails in the Limousin and Auvergne .

Other examples can be found on old tombstones on the Cotentin peninsula .

In Germany, the Ansverus Cross is in Einhaus and the Kleverschuss Cross in Lübeck . A wide Celtic cross can be found in the church of St. Maximilian (Munich) at the high altar.

Symbol in the far-right scene 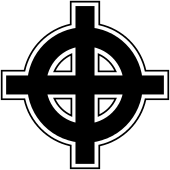 Isosceles Celtic cross as an emblem of the forbidden VSBD / PdA

The 'isosceles' Celtic cross was also the symbol of the right-wing extremist and forbidden People's Socialist Movement in Germany (VSBD / PdA) and is still widely used as a symbol in the right-wing extremist scene - in a strongly stylized form. In this context, it is a criminal offense under the German Criminal Code to use symbols of unconstitutional organizations . According to the case law of the Federal Court of Justice , the isolated use of a stylized isosceles Celtic cross (i.e. “the representation of an isosceles cross with a ring around the intersection”) can be punishable under Section 86a of the German Criminal Code, unless the external circumstances clearly show that the protective purpose of the standard is not affected. The isosceles Celtic cross is mostly associated with the white power movement in the USA . This variant is also similar to the symbol of the so-called zodiac killer , a serial killer of the late 1960s in the United States, but whose actions were not racially motivated.

In France , the Celtic Cross had been the symbol of several right-wing extremist and neo-fascist groups since 1945, and it became particularly prominent in the 1960s when it was used by the OAS , a paramilitary organization that attempted to prevent Algeria's independence by force.

The European National Front (ENF), a former coalition of European right-wing extremist parties, used a stylized Celtic cross in their logo. In Poland, the symbol was registered as a registered trademark by the National Rebirth of Poland party (Polish member of ENF) in 2011 .

In Unicode is the Celtic cross as characters U + 1F548 (?) version 7.0 (2014 June) celtic cross in block Various pictographic symbols included.