Carndonagh ( Irish : Carn Domhnach ) is a village in County Donegal . The place is located in the north of the Irish Republic , in the middle of the Inishowen peninsula and has 2,471 inhabitants (as of 2016). A shirt factory and alcohol industry are located in the village. 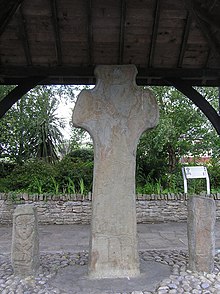 View of Carndonagh with church

Close to the church is Carndonagh's greatest attraction, the heavily eroded early Christian Donagh Cross (also called Carndonagh Cross or St. Patrick's Cross ) from the 7th century. The upper part shows a cross-shaped knot pattern. In the lower area, a large adorant is surrounded by two by two smaller people. At the very bottom there is a group of three facing left. Wickerwork can be seen on the back. The cross is one of the oldest in Ireland and belongs to a former monastery built by St. Patrick for Bishop Mac Cairthen. It is flanked by two cross slabs . One shows a man with a sword and shield, a bird, David with his harp and a curvilinear motif, while the other stone shows several men, one of them with two axes.

The Marigold Stone (or marigold stone) is a stele that stands in the cemetery next to the Carndonagh Cross. The 1.68 m high column is about 43 cm wide and decorated on all sides. The east and west sides of the stele show the most fascinating representations. The west side has a flabellum (Latin for "fan"), the head of which consists of a large circle with a seven-petalled marigold. Peter Harbison explains in his book "Pilgrimage in Ireland" that the flabellum could imitate a relic of Saint Colmcille. Two large loops can be seen on the underside of the flabellar wrap. On each side of the handle are two figures carrying sticks and bags. The two figures are supposed to represent pilgrims. There are many examples of this type of figure in Ireland, including the stones of Killadeas . One of the figures on the white island can also represent a pilgrim. Another example of the marigold stone is one of the two pillars next to the Carndonagh Cross. He also wears a figure that is likely to represent a pilgrim. Below the two figures is another symbol of pilgrimages, the arched cross. This representation appears in many places in Ireland. The stele in Reask is such an example.

The east side of the pillar bears a unique crucifixion scene. The figure of Christ lies on a cross with equal arms and his head protrudes from the stone (resemblance to Riasg Buidhe ). A knot pattern ribbon hangs from the bottom of the cross. It ends in a three-part knot. On each side of the tape there is a figure who could represent Longinus and Stephaton . Below the knot there is another carved cross with equal arms. The northern and southern sides also have decorations.

One of the city's landmarks is the Sacred Heart Church, built between 1942 and 1945. It can accommodate 1,500 visitors. Four statues were made for the church by Albert Power (1881–1945) from Dublin granite. It is listed in the National Inventory of Architectural Heritage of the Republic of Ireland.

John Colgan was born near the village , a later Franciscan , of whom three volumes of a six-volume work on the Irish saints ( Acta Sanctorum Hiberniae ) have survived. Colgan probably died in Leuven in 1657 .