Engert, who was born under the name Otto Gentsch , did an apprenticeship as a carpenter and then went on the roll . In 1913 he joined the SPD and was a soldier during the First World War . Via the USPD he came to the KPD in 1920 , which he represented in the Altenburg district council and from 1924 to 1929 also in the Thuringian state parliament . He was as a district manager and temporary editor of Saxon Arbeiterzeitung full-time functionary of the party, was theoretically versed member of the inner-party education worked and was 1927 to one year imprisonment sentenced. At the end of 1928 he was expelled from the party because of his resistance to the Stalinist course of the Thälmann leadership . Engert joined the Communist Party Opposition (KPO). As their candidate, he was elected mayor of Neuhaus am Rennweg in July 1929. The Thuringian Minister of the Interior Wilhelm Frick ( NSDAP ) temporarily removed him from office in 1931.

Engert, whose wife ran a vegetable shop in Leipzig, also worked illegally for the KPO during the Nazi era. After an eight-month prison sentence and subsequent concentration camp imprisonment in the Colditz and Sachsenburg camps , he worked again with illegal KPD groups and, in 1943/44, organized a resistance group with Georg Schumann in Leipzig , whose platform he and his KPO comrade Alfred Schmidt had composed. In July 1944 Otto Engert was arrested, sentenced to death and executed on January 11, 1945 in the courtyard of the Dresden Regional Court . 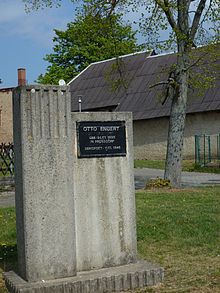 In Neuhaus am Rennweg a memorial stone, a street and an allotment garden named after him commemorate Otto Engert, in Altenburg a memorial plaque and, until 1991, a street. The Nobitz district of Engertsdorf in the Altenburger Land district also bears his name. In the 1950s, due to Engert's membership of the KPO, the naming of a school in Neuhaus am Rennweg and streets in several places in the GDR were reversed.

Two streets in Leipzig were named after him, Engertstrasse in the Lindenau district and Otto-Engert-Strasse in the Mölkau district, which was incorporated in 1999 . There are five other streets named after him in Saxony and Thuringia, namely in Kriebitzsch , Meuselwitz , Prößdorf, Windischleuba and Zwenkau .