Georg Schumann (born November 28, 1886 in Reudnitz , Saxony , † January 11, 1945 in Dresden ) was a German communist and resistance fighter against National Socialism .

Even his father was a socialist. The trained toolmaker joined the SPD in 1905 and was elected shop steward in Jena in 1907 . In 1912 he attended the Social Democratic Party School in Berlin, where Rosa Luxemburg discovered his talent for journalism. The SPD hired him in 1913 as editor of the Leipziger Volkszeitung . During the war, Schumann joined the “International Group” founded by Luxemburg, Karl Liebknecht and Clara Zetkin (see Spartakusbund ) and agitated against the war in the Leipzig youth workers. In 1916 he was drafted; for illegal work for the Spartacus League in the army, he became imprisonment convicted. One of his guard soldiers was the later communist revolutionary Max Hoelz , to whom Schumann taught the basics of socialism .

In November 1918, Schumann headed the Spartakusbund in Leipzig and in 1919 became political director of the KPD district of Leipzig, changed to the KPD district of Halle - Merseburg in 1921 and was elected to the Prussian state parliament in the same year . In 1923 the KPD party congress elected him to the party headquarters. In the factional struggles after the October defeat of the KPD in 1923, Schumann joined the so-called middle group; the ultra-left no longer elected him to headquarters in 1924, and he had to surrender the seat he had won in the Reichstag in May 1924. At the end of 1924 his state parliament mandate and with it his immunity expired . Since he had been a member of the KPD headquarters in 1923, he was persecuted by the police. He emigrated to Moscow in early 1925 . In March 1926 he returned to Germany to become party leader again in Halle-Merseburg, but was arrested and spent almost a year in custody . In 1927 he was re-elected to the Central Committee and political leader in West Saxony (Leipzig), in 1928 a member of the Reichstag. In the factional struggles in 1929, he decided again for the middle group, the so-called " Compromisers ". The victorious left wing around Ernst Thälmann therefore deposed him against violent protests as head of the West Saxony district. At the end of 1929 he submitted to the Thälmann Line, was again a member of the Reichstag from 1930 to 1933 and was primarily involved in the communist unemployment movement. 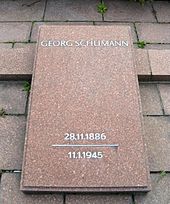 On February 7, 1933, Schumann took part in the illegal meeting of the Central Committee of the KPD in the sports store Ziegenhals near Berlin. After the transfer of power to the Nazis, he directed the illegal resistance work in Wroclaw , was arrested in June 1933 and in August 1934 by the People's Court to three years in prison convicted. After serving his sentence in Waldheim prison , Schumann was taken into " protective custody " and held in Sachsenhausen concentration camp until June 1939 . After his release, Schumann worked again as a locksmith in Leipzig. From 1941 he built one of the largest communist resistance groups in Leipzig and the surrounding area, together with Otto Engert and Kurt Kresse , the so-called Schumann-Engert-Kresse Group . Schumann's son Horst, born in 1924, also belonged to the group. The group was roughly oriented towards the National Committee for Free Germany , but, like the Knöchel-Seng group in the Ruhr area , emphasized its socialist goals, such as the expropriation of large-scale industry, more clearly than the KPD's leadership in exile in Moscow at the time. The wave of arrests by the Gestapo began in the summer of 1944 , and Schumann and Engert were also arrested in July. Both were severely tortured for trying to reveal other members' names, but stood firm and believed to save the lives of so many other resistance fighters. On November 21, 1944, the People's Court sentenced Schumann to death for “preparing for high treason , favoring the enemy and degrading military strength ”; on January 11, 1945 he was executed in Dresden . After the end of the war, Georg Schumann's urn, together with those of other leading members of the resistance group, was buried in the southern cemetery in Leipzig at an exposed location on the central axis of the main path. 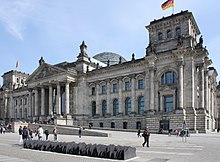 Since 1945 a large street in Leipzig, the western main arterial road as part of the federal highway 6 in the direction of Schkeuditz and Halle (Saale), has been called Georg-Schumann-Straße . In 1948, the resistance fighters of the Engert-Schumann-Kresse group who were buried in Leipzig's southern cemetery were erected a memorial in the form of the bronze sculpture “Dying Fighter” by the sculptor Walter Arnold .

In 1966 a cargo ship belonging to the German shipping company of the GDR was named Georg Schumann . From 1972 to 1991 one of the barracks of the NVA in the Möckern district of Leipzig was given the honorary name of Georg Schumann barracks . A memorial that has since been torn down also commemorated him. A middle school in Leipzig is still called the Georg Schumann School today . Also in Leipzig, a youth hostel in the Villa Baedeker, which was operated from 1953 to 1998, bore his name.

The former courthouse in Dresden's Südvorstadt , today the Münchner Platz Memorial , has been called Schumann-Bau since 1957 and is used by the TU Dresden (Faculty of Economics and Mechanical Engineering). The neighboring street on the edge of the TU campus also bears the name Georg-Schumann-Straße .

Since 1992, one of the 96 memorial plaques for members of the Reichstag murdered by the National Socialists has been commemorating Schumann in Berlin near the Reichstag . 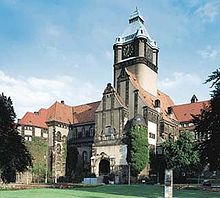 Schumann building of the TU Dresden