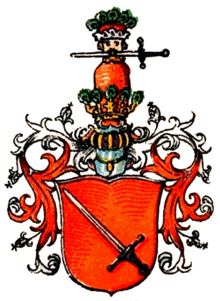 The Kreß von Kressenstein (also Kress von Kressenstein or Kreß von Kreßenstein) are one of the oldest patrician families in the imperial city of Nuremberg , first mentioned in 1270. The Kreß were in the Inner Council from 1418 with short interruptions until the end of the imperial city period in 1806 represented, belonged according to the dance statute to the new sexes eligible for advice and were also members of the imperial knighthood in the knight canton Altmühl since November 18, 1651 because of the possession of Dürrenmungenau .

As one of the first verifiable members of the Kreß family, "Heroldus Krezze" was named among the knight families in the Nuremberg area in 1270 . The direct line began with Friedrich Kreß, who owned a farm in Kraftshof near Nuremberg around 1300 as a tenant of the Lords of Berg . He also donated the Kraftshof fortified church of Sankt Georgen , consecrated in 1315 . In 1357, Brechtel Cresse sold the manor in Kraftshof to his brother-in-law Konrad Ehinger from a Nuremberg councilor family. After a few changes of ownership, the "Steinhaus" at Kraftshof built by the Ehinger family came to the brothers Konrad and Ulrich Kreß in 1403; In the Salbuch of Ulrich Kreß from 1410 the name "Kressenstein" can be found for the first time. The manor was destroyed in 1449 during the First Margrave War. Hieronymus Kreß had a small, simple half-timbered upper storey, which was known as the "summer house", temporarily placed on parts of the preserved base storey of the destroyed castle. Around 1457 he had a new manor built next to it as a moated castle. This survived the War of the Landshut Succession in 1504 and the Second Margrave War in 1552/53 unscathed. In 1530 Georg and Christoph Kreß received the privilege of Emperor Karl V to designate the new seat as Kressenstein and to name themselves after that. At the same time they were granted a free right of disposal and inheritance to the imperial fiefs, which enabled Christoph Kreß to independently determine the property and to convert it into a " advance payment " that was to be administered by the oldest Kreß. The new mansion can hardly be seen changed in pictures from around 1630. During the Thirty Years War, the new Kressische Wasserschloss was burned down in 1634. It was not until 1712/13 that Georg Adolf Kreß had a representative two-storey baroque mansion with a hipped roof built on the site of the earlier economic building. This was destroyed in World War II. The "summer house" sitting on the base of the old castle stable is still standing today and until 1934 contained the Kreß family archive; the family holds the property in Kraftshof to the present day.

Since the middle of the 14th century, the Kreß also owned a farm in the neighboring town of Neunhof . In place of this older courtyard, which was devastated in the First Margrave War in 1449, Hans Kreß had Neunhof Palace built around 1479 . It remained in the family's possession until 1503 and a century later, in 1615, by marriage again to the Kreß, in whose possession it remained until an inheritance through the female line in 1856.

In 1349 the Kreß were included in the ranks of the ruling families of the imperial city of Nuremberg and from 1418 they belonged to the Inner Council and thus to the ruling Nuremberg patriciate .

The family made wealth through long-distance trade. Around 1370 the Kreß-Rummel-Gesellschaft traded oxen from Hungary and other goods between Venice , Milan and Krakow . In 1388 they separated from the hype and ran the old trading company on their own. Around 1390 they obtained silver from the Carpathian region for the Venetian coin. They were in contact with the Flemish cloth centers and the north-west German economic area through the Flexdorfer. Money transactions are also documented. In Venice, the Kreß and the Paumgartner had their own chamber of commerce in the Fondaco dei Tedeschi from the late 14th century . In 1430 the trading company of the Kreß dissolved. However, some family members continued to work in trade and money transactions. Between 1499 and 1511 the Kreß took part in a new Nuremberg – Milan society of the Kreß – Köler – Saronno .

The Kreß played an important role in the Nuremberg city nobility for centuries. They were very often represented in the council of the imperial city of Nuremberg . In 1530, Emperor Charles V awarded them the Kressenstein title . Family members were involved in major historical events: Christoph Kress von Kressenstein (1484-1535), a council of war of the Swabian League, signed in 1530 at the Diet of Augsburg , the Augsburg Confession , the confession of the Lutheran imperial estates to their faith, and the mayor Jobst Christoph Kress von Kressenstein (1597–1663) signed the Peace of Westphalia in 1648. With Hans Wilhelm († 1658) and Jobst Christoph († 1694) the family provided two Reichsschultheiße of Nuremberg. Since 1651 the Kreß were also members of the Franconian knighthood of the canton Altmühl through the acquisition of Dürrenmungenau Castle (today a district of the city of Abenberg ) . Because of this, the family was in 1815 enrolled the simple Bavarian nobility and in 1817 Baron class of Adelsmatrikel of the Kingdom of Bavaria raised.

The Kressenstein Kresses owned large estates in and around Nuremberg. Among other things, the garden property on today's Kressengartenstraße. They also owned:

The family coat of arms shows in red a sword placed diagonally to the right with a golden handle. On the helmet is a red-clad man's torso with a black hat and an ermine brim, holding the sword horizontally in his mouth between boar teeth. The helmet covers are red-silver.

The sword from the coat of arms of the Kreß von Kressenstein family still appears in some Bavarian local coats of arms.