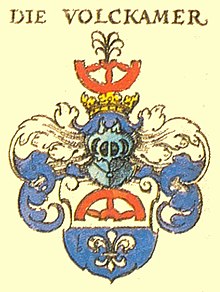 The Volckamer von Kirchensittenbach (also Volkamer or Volkmar ) are a Nuremberg patrician family , first mentioned in a document in Neumarkt in 1278. The Volckamer were represented and belonged to the inner council from 1362, with short interruptions until the end of the imperial city period in 1806 according to the dance statute to the twenty old advisable genders. Branches of the noble family still exist today.

Originally the family was called Volckmeyr. The name form Volckamer only became common in the 15th and 16th centuries. The family comes from the Upper Palatinate city ​​of Neumarkt. They came from respected backgrounds and lived in Neumarkt until the beginning of the 15th century.

The first representative of the Volckamer family came to the imperial city of Nuremberg 30 kilometers away with Hartwig Volckmeyr (also: Hertel Volkmar) at the end of the 1330s . It is documented from 1337 in Nuremberg and was able to acquire the famous Nassau house near St. Lorenz in 1363 . The St. Lorenzer Line and the St. Sebalder Line , named after the inner-city parishes, descend from his sons Heinrich and Hartwig . The St. Lorenz line, however, went out in 1602, while the St. Sebalder line split into several branches. The Sebalder line had inherited the then extinct Nuremberg patrician family Tetzel von Kirchensittenbach in 1694 and then adopted the name Volckamer von Kirchensittenbach .

The Volckamer became prosperous through long-distance trade, among other things . Around 1400 they traded in spices and cloths on the Lower Rhine . Later they also got involved in mining in Thuringia . However, the Volckamer stood out in the diplomatic service for Nuremberg much more strongly than in the trade and mining sector.

The family became one of the most important and influential in the Nuremberg city nobility and remained so until the loss of the imperial immediacy of Nuremberg in 1806. Three foremost slogans (administrators of the city taxes ) and Reichsschultheiße of Nuremberg provided the family: Paul (also: Paulus) (†) 1505), Georg († 1633) and Christoph Gottlieb († 1752). An imperial coat of arms improvement by awarding a golden crown came to the Volckamer in 1433 and a further coat of arms increase in 1696. In 1813 the family was entered in the nobility class of the nobility register in the Kingdom of Bavaria .

The Volckamer had extensive possessions in and around Nuremberg. Amongst other things:

The family coat of arms is divided. Above in silver half a red wheel and below in blue a silver lily. On the crowned helmet is half a red wheel, turned upside down, with black feathers in the middle. The helmet cover is red-silver.