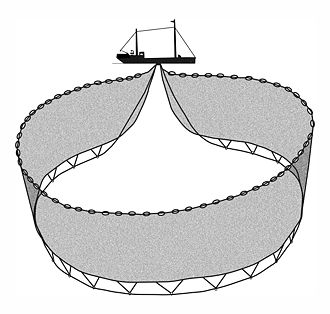 The purse seine is laid out in a ring around a school of fish . The net is then pulled tight with the lacing line on the lower line so that the fish are completely enclosed in the net. In the lower part of the net, purse seine has very small mesh sizes, so that a gentle catch of the fish is guaranteed and skin and gill injuries are largely excluded.

Purse seine nets are used all over the world to catch valuable edible fish , especially for tuna , but also to catch sardines , herrings and mackerel . Apart from the situation in the Tropical East Pacific, it is a comparatively selective and environmentally friendly fishing method .

Influence on the seabed

Compared to bottom trawling or beam trawls , purse seine nets have hardly any negative effects on the seabed and the organisms living on it.

Individual schools of fish can be selectively fished with purse seine nets . It is not caught randomly, as is the case with driftnets or in shrimp , cod and pelagic trawling . The bycatch rate (sea turtles, sharks, marine mammals, sea birds and non-target fish species) of purse seine nets is, according to the FAO at about 5% of the total catch, which is below the global average catch rate of all fishing methods of 8%.

Since individual schools of fish are almost completely removed from the ecosystem with purse seine nets , they can endanger the reproductive capacity of heavily fished species. For example, on June 11, 2007, the EU issued Regulation (EC) No. 41/2007 for the conservation of tuna stocks in the Atlantic , with which, among other things, the use of purse seine nets when catching bluefin tuna in the Eastern Atlantic from July 1 to December 31, 2007 was banned.

In June 2008 the EU banned the use of purse seine nets to hunt these fish in the Mediterranean and Eastern Atlantic at an early stage because of massive violations of the internationally agreed rules for the sustainable management of bluefin tuna stocks . The catch stop applied to the tuna fleets from Greece, France, Italy, Cyprus, Malta and Spain. According to official figures, half of the French fleet had not caught anything by June 2008, while the other half had already used more than 90% of the respective quota, but all ships were similarly active. Italian purse seiners had already exceeded their quotas by 100–240%. At least eight search planes were also identified that were still working with EU purse seiners to track down schools of bluefin tuna, even though the use of such planes is illegal.

Environmental organizations question the effectiveness of the measure. Shortly after the fishing ban, Italian purse seine catchers were discovered on a fishing trip, as well as search planes that were still cooperating with the fishermen.

In the Tropical East Pacific , schools of yellowfin tuna ( Thunnus albacares ) in particular are associated with schools of slender and spinner dolphins . Under a pod of dolphins swimming on the surface of the water, there is a high probability that a school of tuna can be found at a depth of up to 150 m. This biological phenomenon remains a mystery to this day and only occurs in this marine region. When fishing for tuna, fishermen use helicopters or speedboats to look specifically for schools of dolphins, hunt them and then circle them with the purse seine net in order to fish the swarm of tuna underneath.

Use of purse seine until early 1990

According to the US Earth Island Institute (EII), more than 7 million dolphins were killed in the period from the late 1950s to the beginning of the 1990s through the targeted hunt for schools of tuna in the tropical east Pacific . The EII describes this as "the greatest mass extermination of marine mammals in human history".

Enforcement of EII guidelines in the US

In 1986, the EII launched a US-wide campaign against purse seine fishing in the Eastern Tropical Pacific. As a result, sales of canned tuna in the USA fell so sharply that large tuna importers such as Star Kist , Bumblebee or Chicken of the Sea were forced to accept EII guidelines for dolphin-safe caught tuna in 1990 . US tuna importers pledged not to import any more tuna caught by hunting and orbiting schools of dolphins with purse seine nets. In the same year, the US Congress tightened the Marine Mammal Protection Act (MMPA), which had existed since 1972, and established the EII guidelines for tuna caught in a dolphin-safe manner as the legal standard.

La Jolla Agreement of the IATTC

The Inter-American Tropical Tuna Commission (IATTC), which is responsible for fisheries management in the tropical East Pacific, passed the La Jolla Agreement in 1992 , which provides for a continuous reduction in by-catches of dolphins by setting permissible mortality rates for dolphins. On the basis of 19,500 dolphins allowed to be killed in 1993, the quota fell to below 5,000 in 1999. With the La Jolla Agreement , the IATTC attempted to circumvent the strict US rules for the import of so-called “dolphin-friendly” tuna.

As a successor program to the La Jolla Agreement , the IATTC established the Agreement on the International Dolphin Conservation Program (AIDCP) in 2001 with its own Dolphin Safe label. International nature conservation organizations such as the EII reject this label as a Death Certificate for Dolphins , as it tolerates a dolphin bycatch quota in purse seine fisheries in the tropical east Pacific.

Since the US administration under Presidents Bill Clinton and George W. Bush did not succeed in changing the Marine Mammal Protection Act despite several attempts in court, canned tuna with the AIDCP label is still not allowed to be sold in the USA .

Situation in the European Union

In Germany, there is an agreement between large parts of the tuna industry and the EII not to process or import tuna caught with purse seine in the tropical East Pacific under the conditions of the IATTC. This agreement is monitored by the German partner organization of the EII, the Society for the Rescue of the Dolphins . The European Dolphin Safe Monitoring Organization founded by the EII is responsible for controls in the other EU member states .

Success of the measures

According to the IATTC, the dolphin bycatch rate of the purse seine fishing fleets operating in the tropical Eastern Pacific was 900 or about 0.01% of the estimated population size for the affected dolphin species in 2006.

Technically, the reduction in the dolphin bycatch rate is achieved by releasing the school of dolphins caught when the purse seine was used after the network group merged. Recent research by the National Oceanic and Atmospheric Administration's Fisheries Department of the United States' National Oceanic and Atmospheric Administration ( NOAA ) and the Blue Ocean Institute shows that, despite the use of this alternative fishing method for tuna fishing in the tropical Eastern Pacific, the thin and spinner dolphin populations are not recovering to have. The scientists attribute this to the fact that while the purse seine fishermen hunt the dolphin schools, dolphin mothers are separated from their calves; Left to their own devices, these calves have no chance of survival.