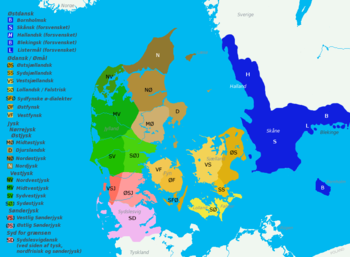 The Danish dialects (Danish folkemål "vernacular languages") are a subgroup of Danish . They differ on the one hand from the standard language and on the other hand from each other in terms of sound, vocabulary and grammar.

The variants of Danish are well recorded by dialect research . They are divided into three main groups and several subgroups:

Ømål or ødansk . (Note: The term "East Danish" is used for the dialects further east on Bornholm and in the regions of Schonen, Halland and Listerland / Blekinge, which were formerly part of Denmark and now part of Sweden.)

In Danish dialectology, the dialects that are now mostly described as southern Swedish in the Danish regions in Skåneland up to 1658 are traditionally included in eastern Danish :

The written language Reich Danish (rigsdansk) belongs to the Zeeland group when it was also originally developed because of the Lakes Region and Scanian. Today there is a debate about whether there is a precisely definable variant that can be called the Reich language. The majority of Danes today speak variants that are close to the written language, which have more or less distinct regional tints.

In the case of Københavnsk , the dialect spoken in Copenhagen, linguists differentiate between the sociolects of High Copenhagen and People's Copenhagen ( høj- or lavkøbenhavnsk ). The former is the language traditionally spoken on radio, television and by the educated class, but the boundaries are not as recognizable as they were before. The Queen's language is another example of a relatively well-preserved High Copenhagen pronunciation. You can still feel the High Copenhagen pronunciation well in the affluent districts north of Copenhagen. The spread of “people's Copenhagen” innovations throughout the country has been noted by many sociolinguists. These changes spread first in the larger cities, especially on Zealand, and then in smaller towns and out into the countryside. The phenomenon was called urban jumping .

Features of the dialects 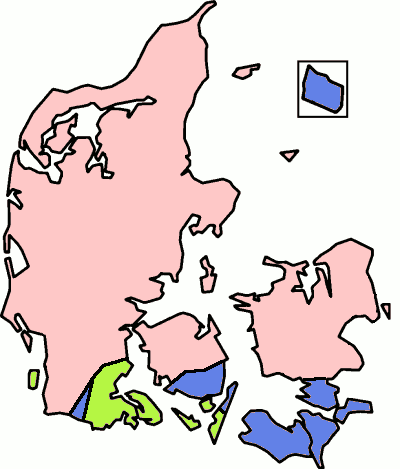 The Scandinavian two-syllable accent (tonal accent) has only been retained in a belt along the southern Danish islands and in the landscapes that belong to Sweden today ; but there is no typical Danish sound in these areas .

In East Danish the original ending -a is retained in many words, in island Danish it was weakened to -e ( Schwa ), while in Jutian it has disappeared ( Apokope ). Therefore, many two-syllable words in Jutland occur as monosyllables, which is also clear for speakers of a regionally colored variant of the standard language. 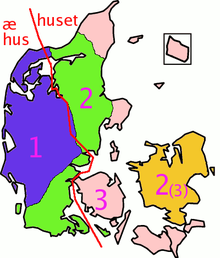 West of the line: preceding article, east: trailing article. The numbers indicate the number of genera ; Zealand has only recently switched from three to two genera.

A significant dialect boundary in Denmark is the position of the definite article. In eastern Jutland and on the islands this is added after the noun, as in the other Scandinavian languages . In the west and south of Jutland, however, it is put before the noun, as in most European languages. This is how the man and the house are called manden and huset in eastern Denmark , while in western and southern Jutland they say æ mand and æ hus ; no distinction is made here between sexual ( utrum ) and neuter ( neuter ).

In Imperial Danish a distinction is made between two genera (utrum and neuter), which find their expression in the articles en and et . In North Jutland , East Jutland and in most of the dialects of the islands the original three Indo-European genera are or have been retained; here the articles appear in (male), en (female), et (neuter).

In West Jutland, on the other hand, a separate system was developed that only knows a single gender. Instead, a distinction is made between countable-individual terms and uncountable-material ones : The Danish word træ means both tree and wood in German; in the east of Denmark and in high-level language it is always called det træ "that tree, that wood", but in West Jutian den træ means "that tree" and det træ "that wood".

The relatively large regional differences in vocabulary have only survived today in the most pronounced dialects. However, there are still recognizable Jutian regionalisms such as B. glad ved place glad for (≈  at glad something or via glad something). A word like træls (≈ laborious, tiring) is always felt by Copenhageners to be typically Jutian, although it actually comes specifically from East Jutland. However, the word has gradually been incorporated into standard language, probably because there was previously no applicable term.

The pronoun I has three main forms, each of which belongs to the three major dialect groups: Anyone or Ever on the Islands; jag or yes in East Danish; a in Jutland, but æ in South Jutland and in the north-western area Thy . These three forms all go back to common Germanic ek , but were already recognizable in the oldest runic inscriptions in Skåne as jak, on Zealand as jæk and in Jutland as ak or æk . Speakers of a local variant of the high-level language often find it difficult to discard their accustomed a or æ (for comparison: similar to the northern German colloquial language, where ick is well preserved).

The common belief that Sønderjysk is very much influenced by the Low German vocabulary cannot be clearly confirmed. For example, you can find words like gevyrts (≈ spice) and the greeting mojn, which was only widespread in the 20th century . Some of these words came into everyday language with German school lessons (1864–1920), but can now be assigned to a dying generation. On the other hand, Sønderjysk has also received old Scandinavian words, some of which have been replaced by German loanwords in Imperial Danish, e.g. B. fikk (≈ pocket, Swedish ficka, Reich Danish lomme ), grander (≈ clever, Reich Danish klog, older Danish gran, Icelandic grannur ), snel (≈ friendly, Reich Danish nimble, Swedish snäll, Icelandic snjall ).

While the majority of Danes spoke a dialect around 1950, the classic dialects have declined today. Most people speak a variant of the standard language, but by no means without regional coloring. However, Copenhagen is an exception, as it has dominated linguistic development throughout the country for many decades and is increasingly influencing the standard language itself. It is therefore difficult to classify Copenhagen among the classical dialects today.

Dialect is still widely spoken in the areas furthest from the big cities, especially in South Jutland, West Jutland, North Jutland and Bornholm. These are also the dialects that differ most from the standard language. Many people have several, clearly separated variants, so that they speak dialect in the family, but a language that approximates Imperial Danish at school or at work. With some others, a mixed language emerges.

Dialects have been completely ignored in schools and in the media to this day. In the 1960s, students coming from Jutland were asked at the University of Copenhagen to take a course to practice correct high-level language. However, efforts have been made to preserve the dialects since the 1990s. Synnejysk Forening was built in South Jutland ( North Schleswig ) for this purpose. Due to their initiative, Sønderjysk is offered as an optional subject at some schools.

In some parishes near the border in Schleswig-Holstein , the traditional South Jutian dialect ( Sønderjysk ) is still spoken. There is no connection between national creed and language; especially earlier it happened that Germans spoke Danish and vice versa. The standard Danish language is spoken today by the majority of the Danish people from southern Schleswig ; within the family and in everyday life mostly also High German or partly Low German or North Frisian. The variant of Danish spoken in South Schleswig is called Sydslesvigdansk (South Schleswig Danish). It should be noted here that South Schleswig-Danish is not to be seen as a variant of the South Jutian dialect, but as a variant of Standard Danish with a slight regional coloring and many Germanisms in the vocabulary. In this respect, it is comparable to the Danish language in Greenland.

The South Jutian dialect was spoken in the Middle Ages to the south of Husum and Eckernförde , as can still be seen from the place names; Over the centuries there has been a change in language to Low and High German. In Angling and Schwansen in southern Schleswig, Anglo-Danish was common as a colloquial language until the language change in the 19th century , and there was still a language island ( Fjoldemål ) on the Schleswig Geest around Viöl , where many features of an older language level have been preserved since they disappeared in Denmark .

The dialects east of the Öresund (including Bornholm) are traditionally referred to as Eastern Danish in Danish dialectology , whereas in the Swedish tradition they are referred to as Southern Swedish . Linguistically, this double terminology is due to the fact that the dialects have features of both Danish and Swedish, and the historical background is that the formerly Danish landscapes of Halland, Schonen and Blekinge have only belonged to Sweden since 1645 and 1658 respectively.

Although the areas belonging to the Kingdom of Denmark have their own national languages , Danish is taught as the first foreign language in schools. In particular, some ethnic Greenlanders have Danish as their mother tongue and only little knowledge of Greenlandic , especially in Nuuk . The Danish spoken in Greenland cannot be classified as a dialect; Danish settlers speak their usual variant (mostly close to the standard language) and Greenlanders speak the standard language, as it is learned in school or spoken in Copenhagen. Greenlandic words are often used to convey special terms.

The Danish variant on the Faroe Islands is also known as gøtudanskt (Faroese for street Danish ); This is about a particularly written pronunciation, influenced by the Faroese phonology, which is reminiscent of the language in northern Norway .