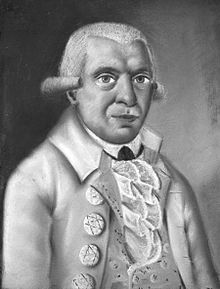 Conrad Moench (born August 15, 1744 in Kassel , † January 6, 1805 in Marburg ) was a Hessian , German pharmacist , chemist and professor of botany . Its official botanical author abbreviation is " Moench ".

Moench was an instructor in the field of pharmacy. From 1786 until his death he was a professor of botany and the author of several local botanical works. In 1792 he built a laboratory at the Marburger Ketzerbach, which served as a training and research facility for chemistry and pharmacy.

In 1794 he wrote the Methodus plantas horti botanici et agri Marburgensis , a work on the plants of the botanical garden and the area around Marburg an der Lahn. This work contains several new genera, for example that of the torch lilies ( Kniphofia ), which Moench set up in honor of the scientist Johann Hieronymus Kniphof , the genus Bergenia ( Bergenia ) in honor of Karl August von Bergen or that of the everlasting flowers ( Helichrysum ). In a supplement to the native flora Marburg he called 1802, the three-leaf spar Spiraea trifoliata of the family Rosaceae (Rosaceae) in Gillenia trifoliata order as they in their tube-to bell-shaped seed pods, the dust and the peculiar carpels of the genus Spiraea different .

In his first years Moench still followed the then new Linnean system, for example in his work Enumeratio plantarum indigenarum Hassiae , published in 1777 . But later, for example in his last great work Methodus from 1794, he joins Gleditsch , who developed a system according to the classification of the stamens. The title of Moench's book expressly states “a staminum situ describendi” (translated: according to the position of the stamens). So Moench was one of the opponents of Linnaeus' sexual system for the plants. Later, however, Carl von Linné's system prevailed. But because Moench took over another achievement through Linnaeus - the binary naming of the species - his names published here are still valid today.

In Moench's time Marburg was famous for its educational establishments, respected schools and academies; the gardens of the inhabitants were filled with rare plants from various countries. The genus Gillenia was named after Arnold Gillen (* 1586), the personal physician of Landgrave Moritz . Britton gave the genus the botanical name Porteranthus , which is used especially in America. In this supplement, he also honored the botanist Domenico Nocca (1758-1841) with the description of the genus thlaspi ( Täschelkräuter ) as Noccaea today by again Thlaspi is disconnected. In the late 18th century named Moench the family of sun hats as Echinaceae , but it was later in the family of Asteraceae integrated (Asteraceae).

In his honor, Jakob Friedrich Ehrhart named the genus of chickweed from the carnation family (Caryophyllaceae) as Moenchia .