Main street of Neuenstadt am Kocher, view of the upper gate tower

Neuenstadt am Kocher is a town in the district of Heilbronn in the Franconian north-east of Baden-Württemberg . It is a sub-center in the northeastern district. The city belongs to the Heilbronn-Franken region and to the edge of the European metropolitan region of Stuttgart .

Neuenstadt lies in the east of the district on the Kocher , into which the Brettach flows here. The area of ​​the city is part of the natural areas of the Swabian-Franconian Forest Mountains , Kocher-Jagst Plains and Hohenloher-Haller Plains .

Neuenstadt's mother settlement is the Helmbund settlement , first mentioned in 797 , which was located in the floodplain of the Brettach. Presumably at the beginning of the 14th century, this settlement was relocated to the ridge between Kocher and Brettach, about a kilometer away, and the “new city” of Neuenstadt was created. The Helmbund no longer exists today, the ruins of the Gothic Helmbund Church are one of the last remains.

Initially, Neuenstadt was owned by the Lords of Weinsberg , who built the manor house attested there in 1392, then came to the Electoral Palatinate and was conquered in 1504 by Duke Ulrich of Württemberg . Duke Christoph expanded Neuenstadt into a secondary residence. In 1558 the lime trees near the castle were walled and around 1565 the castle was expanded. From 1617 to 1631 it was the secondary residence of Duke Friedrich Achilles (1591–1631), after his death it returned to the main line of Württemberg. After the Battle of Nördlingen in 1634 and the flight of the Duke of Württemberg outside the country, the Emperor handed the castle in Neuenstadt over to Count Maximilian von und zu Trauttmansdorff . After being billeted numerous times, it was completely looted at the end of the Thirty Years' War . After the restitution of the Württemberg people in 1649, the Württemberg-Neuenstadt branch resided in Neuenstadt, which expired with Carl Rudolf in 1742.

Neuenstadt was the seat of the old Württemberg office of the same name and came to the Upper Office Neckarsulm in 1806 when the new administrative structure in the Kingdom of Württemberg was implemented .

During the administrative reform in Württemberg during the Nazi era , the city became part of the Heilbronn district in 1938.

In 1939 there were 1272 inhabitants, at the end of 1945 there were 1316. Towards the end of the Second World War , fighting in April 1945 destroyed about 80% of Neuenstadt's inner city; The famous ancient linden tree at the city gate also fell victim to these battles.

Since the city had become part of the American zone of occupation , Neuenstadt had belonged to the newly founded state of Württemberg-Baden since 1945 , which was incorporated into the current state of Baden-Württemberg in 1952.

In 1972/73, in the course of the municipality reform in Baden-Württemberg, four surrounding municipalities were incorporated into the city of Neuenstadt. It all started on January 1, 1972 in Cleversulzbach, followed by Kochertürn on September 1, 1972, and Stein am Kocher on December 31, 1972, which moved from the district of Mosbach to the district of Heilbronn. Finally, on January 1, 1973, Bürg was incorporated.

Neuenstadt, where the Reformation was introduced in 1541, is the seat of a deanery in the Weinsberg-Neuenstadt church district of the Württemberg regional church , which was merged on January 1, 2020 . The Protestant parish of Neuenstadt, which also includes Kochertürn, Stein and Bürg, has around 2960 members. Cleversulzbach has its own Protestant parish. The Catholic parish in Kochertürn is responsible for the entire former Württemberg part of Neuenstadt. In Neuenstadt itself there is the Catholic Church of the Good Shepherd . Stein has its own parish that belongs to the Archdiocese of Freiburg . The Jehovah's Witnesses and the New Apostolic Church are also represented in Neuenstadt . A local community of the Free Church of God (Restoration) is represented in Stein am Kocher , which through a sponsoring association maintained an unapproved private religious school in Stein am Kocher until 2009 , the continued operation of which was prohibited by the Stuttgart Regional Council in July 2009.

The municipal council in Neuenstadt is elected according to the procedure of the false sub-district selection. The number of local councils can change due to overhang mandates . After the local elections on May 25, 2014 , the Neuenstadt municipal council has 20 seats (previously 21). The election result was as follows:

Town hall of Neuenstadt am Kocher 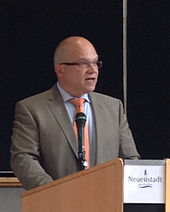 There is also a local council in each of the four towns of Bürg , Cleversulzbach , Kochertürn and Stein am Kocher . At his suggestion, the council elects a volunteer for each village mayor . These bodies are to be heard on important matters affecting the locality.

The blazon of Neuenstadt's coat of arms reads: Two silver triangular shields next to each other in blue above, below a left-facing silver bucket helmet. The city colors are white-blue.

The Neuenstadt coat of arms was first handed down in a city ​​seal from the late thirteenth century. The two triangular shields are taken from the coat of arms of the alleged city founders, the Lords of Weinsberg , who had three silver shields in a red field as coats of arms. The helmet, as a speaking sign, points to the origin of Neuenstadt as a re-establishment of the now defunct Helmbund settlement; the Helmbund local nobility had three helmets in their coat of arms. In essence, the coat of arms remained unchanged from the beginning, only the bucket helmet turned to the left was replaced by a stech helmet turned to the right in seals and other depictions at the latest in the 16th century . It wasn't until 1954 that the city reintroduced the original helmet. The colors have remained unchanged since 1535. In a mayor's office stamp that was used until 1931, the coat of arms was attached to the trunk of a linden tree, which goes back to the town name Neuenstadt an der Linde , which was used to differentiate between places of the same name .

Neuenstadt am Kocher is a member of the largest international city friendship working group Neustadt in Europe , in which 37 cities and municipalities (as of April 2014) named Neustadt from Germany, Austria, Hungary, the Czech Republic, Poland, Slovakia and the Netherlands have come together.

Open-air stage in the castle moat

The freilichtspiele neuenstadt play since 1958, a year in June and July in the moat of the castle Neuenstädter classics and folk plays and recorded up to 20,000 spectators a year.

The city museum in the sheepfold was opened in 1991 and offers a memorial for the Mörike family and exhibits on local history, changing exhibitions all year round. The museum in the city tower includes the former tower house and the former city prison and shows folkloric exhibits. There is a Mörike Museum in Cleversulzbach.

Every year, usually at the end of March or in April, the nationwide famous Neuenstadt Lindenlauf takes place in Neuenstadt am Kocher . Runners from all over Germany compete on one of the three running routes (5 km run, 10 km run and half marathon) and in special school runs. In addition, the Motorman Run has been held every September in Neuenstadt am Kocher since 2010. A record number of participants was reached in 2013, when the organizer, TSV Neuenstadt, imposed a registration freeze on 1,500 participants. It is characteristic of the Motorman Run that the runners take part in costumes (there are runners in chimney-sweep uniforms or suits with ties, runners in wedding dresses, in bikinis, etc.), and that there are various obstacles on the running course that the athletes have to complete.

Ensemble at the former train station in Neuenstadt: on the right the WEG-KVG depot (July 2008)

One of the largest companies based in the municipality is the direct sales company Förch , which deals in workshop supplies.

Neuenstadt is located directly on the A 81 motorway ( Würzburg - Stuttgart - Singen ) with its own junction (exit 8).

From 1907 to 1993 there was a connection to the rail network in Neuenstadt and Kochertürn via the Untere Kochertalbahn Bad Friedrichshall - Ohrnberg as a private railway of the Württembergische Eisenbahn-Gesellschaft (WEG). The operating center of the line was in Neuenstadt. The city of Neuenstadt took the closure as an opportunity to partially use the railway line for a bypass , which was opened at the end of 2007. Otherwise, a cycle path will run along the route from spring 2009 .

The public transport in the Kocher operates the OVR ( bus transport Ruoff ). The Kochershuttle buses run in just under 30 minutes. to Heilbronn.

Neuenstadt has a police station.

In Neuenstadt there is the elementary school Lindenschule, the secondary and secondary school Helmbundschule, the Eduard-Mörike- Gymnasium as well as a special school and a music school. There is a primary school in Stein am Kocher. There are also six municipal kindergartens , two Catholic (in Kochertürn and Stein) and one Protestant (in the city center). In addition, the Unterland Adult Education Center in Neuenstadt has a branch.

Other persons connected with Neuenstadt am Kocher

Wikisource: Neuenstadt am Kocher in the description of the Upper Office Neckarsulm from 1881  - sources and full texts

Cities and communities in the Heilbronn district