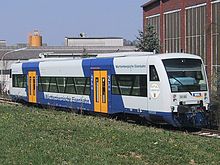 NE 81 the WEG on the Strohgäubahn

The Württembergische Eisenbahn-Gesellschaft mbH (WEG) is a private railway company in Germany . Since the sale of the shares in EnBW , it has belonged entirely to the Transdev GmbH group.

The Württembergische Eisenbahn-Gesellschaft was founded in Stuttgart on May 13, 1899 . By 1907, it built seven branch lines and a local line in Württemberg with a total length of more than 100 kilometers. The routes of the WEG did not form a coherent network, as private railways could only be built where it was not worthwhile for the state railroad . These were mostly peripheral areas that wanted to be connected to the up-and-coming industrial centers of Württemberg.

In 1909 the AG für Bahn-Bau und -betrieb  (BBB) ​​acquired a 95 percent majority stake in the Württembergische Eisenbahn-Gesellschaft. The BBB was bought by the AG for Transport  (AGV) in 1928 and called itself from 1929 Deutsche Eisenbahn-Gesellschaft  (DEGA, later DEG). In the course of the reorganization of the AGV Group, AGV now owned 95 percent of the shares in WEG. In 1966 the WEG was converted from a stock corporation into a GmbH.

Since 1968 there has been an ever stronger connection between DEG and WEG, in the course of which DEG has assumed most of the management tasks. A formal transfer of the WEG shares to DEG only took place in the nineties, when AGIV completely gave up its holdings in transport companies.

In 2000, EnBW sold its 40 percent stake in DEG to the French Vivendi group , which has had a 60 percent stake since 1996, making it the sole owner. Like all DEG subsidiaries, WEG was incorporated into the Vivendi subsidiary Connex Verkehr GmbH. From 2006 to March 15, 2015 Connex operated in Germany under the name Veolia Verkehr, since then under Transdev GmbH .

The WEG was the pioneer among private railways in the dieselization of their routes. In order to be able to maintain the operation in the long term, the WEG procured its first diesel railcars from Maschinenfabrik Esslingen , two Esslingen railcars . The Deutsche Bundesbahn  (DB) also acquired second-hand diesel multiple units and modernized them, such as the VT 70 900–901 . These vehicles then took care of all the traffic on the route. As tow cars , they were motorized accordingly, which means that freight cars could also be attached.

In the early 1980s, WEG began modernizing many of its old vehicles. A new logo was introduced and its own paint scheme was used. The vehicles were painted in a light gray basic shade. The roof was painted silver, the ribbon windows orange and a light blue frame attached to the frame.

The WEG was a popular destination for lovers of old railcars. Until a few years ago, railcars from the 1950s and 1960s were still running on the tracks of the WEG, which were produced by Maschinenfabrik Esslingen and MAN . A one-of-a-kind vehicle operated on the Tälesbahn until 2000, a four-axle vehicle from 1928 acquired by DB, whose powerful Büssing engines made it irreplaceable in freight transport. Today it is owned by the Ulm Railway Friends and is to be used on the museum route from Amstetten to Gerstetten. A former DB railcar from 1926 operated on the Vaihinger Stadtbahn until it was discontinued.

WEG lettering on the former engine shed in Laichingen

After the Württembergische Nebenbahnen GmbH  (WN) and its remaining two lines were incorporated into the WEG in 1984, the federal government canceled the gas oil subsidy. As a result, the WEG could no longer operate its only narrow-gauge line from Amstetten to Laichingen at a cost-covering level. It was discontinued in 1985 and dismantled from Laichingen to just before Oppingen station . Of the former 22.6 kilometers route length, 5.7 kilometers still exist as the Albbähnle museum railway from Amstetten to Oppingen.

Until the mid-1990s, WEG operated most of the branch lines on its own, i.e. almost without subsidies. The smaller companies mostly got by with only one railcar plus sidecar without reserve vehicles. So the expenses could be covered by the income. Swabian thrift kept these routes alive, but then the gradual end of many railway lines became apparent. No more investments were made in the superstructure of most of the lines, the Deutsche Bahn stopped general cargo traffic and the WEG was sold to the Connex Group. The routes Bad Friedrichshall – Ohrnberg (1993), Amstetten – Gerstetten (1996), Ebingen - Onstmettingen ( Talgangbahn , 1998) and Gaildorf – Untergröningen (2000 ) were discontinued as well as the Vaihinger Stadtbahn (2002).

A tram concept for the Bad Friedrichshall-Jagstfeld - Hardthausen line failed because of the costs, as did the restart of the valley railway by the Hohenzollerische Landesbahn in 2002.

Today the WEG only has its own route with regular operation, the valley railway from Nürtingen to Neuffen .

In addition, there are three further routes on which the WEG operates on behalf of the respective owner: Since 1994, the WEG has been operating the lower Wieslauftalbahn from Schorndorf to Rudersberg on behalf of the Wieslauftalbahn Transport Association , later extended to the suburb of -Oberndorf. In 1996 the Schönbuchbahn from Böblingen to Dettenhausen was reopened by the Transport Association Schönbuchbahn. In both cases, WEG was selected as the operator because it was able to present the best concept for the operation of these branch lines. Since 2009, the WEG has been operating the Strohgäubahn from Korntal to Weissach on behalf of the Strohgäubahn association . Until 2009 this line was owned by WEG. Since the summer timetable change in 2018, WEG has been running services between Tübingen and Horb on behalf of Regionalverkehr Alb-Bodensee with Coradia LINT railcars. The temporary time ended with the timetable change in December 2019.

All four routes operated by WEG are integrated into the Stuttgart Transport and Tariff Association  (VVS). The WEG is a member of the tariff association of federal and non-federal railways in Germany  (TBNE).

In 1993, the company's headquarters were relocated from Stuttgart to Waiblingen-Beinstein , where WEG moved into the office building of Omnibus-Verkehrs Ruoff, which it had taken over .

From 1928 the Württembergische Eisenbahn-Gesellschaft operated its own motor vehicle lines and sometimes competed with its own railways by setting up bus lines parallel to the railway lines. In 1955 the WEG-Kraftverkehrs-GmbH (WEG-KVG) was founded, which until 1996 also included a forwarding company with its own trucks.

It is worth mentioning that the WEG rehabilitated two ailing bus companies: Heidenheimer Verkehrsgesellschaft  (HVG) in 1987 and Omnibus-Verkehr Ruoff  (OVR) in Waiblingen in 1990 .

The WEG-KVG was merged with the sister company OVR on January 1st, 2008. The four bus depots of the former WEG-KVG in Albstadt , Hemmingen , Neuenstadt and Neuffen with a total of around 60 buses and around 115 employees operated under the brand name WEG until 2012. In spring 2012, WEG logos were replaced by OVR logos. This means that the OVR now has a unified branding at all 6 locations.