Untereisesheim is a municipality in the Heilbronn district in Baden-Württemberg .

Untereisesheim is located north of Heilbronn am Neckar .

The three neighboring cities of Untereisesheim are ( clockwise , starting in the south): Neckarsulm (with the Obereisesheim district ), Bad Wimpfen and Bad Friedrichshall . All belong to the Heilbronn district. Untereisesheim has entered into an agreed administrative partnership with Neckarsulm and Erlenbach .

Untereisesheim does not include any other districts or places in the geographical sense.

Untereisesheim is mentioned for the first time in 767 as an Eisesheim in the Lorsch Codex . During the time of the tribal duchies, the place was in the Duchy of Franconia . In 1243 the lords of Eisesheim were named as feudal men of the lords of Weinsberg . Today's coat of arms goes back to them. In 1461 the lords of Lomersheim buy Untereisesheim. In 1529 they join the Reformation together with their subjects .

During the Thirty Years' War , the Battle of Wimpfen with thousands of dead takes place on May 6, 1622 between Bad Wimpfen, Biberach, Obereisesheim and Untereisesheim . Among other things, the Württemberg Duke Magnus falls on the side of the Protestant Union troops . In 1655 the place is sold to the Duke of Württemberg .

In 1925 only about 600 inhabitants were counted, in 1939 there were 692 and at the end of 1945 there were 790. In 1959 there were around 1000 inhabitants. With the establishment of large new development areas from around 1960, the population increased significantly: in 1973 two thousand, in 1985 three thousand and finally four thousand in 2005. In the municipal reform of the 1970s, Untereisesheim was able to maintain its independence.

Untereisesheim has traditionally been evangelical since the Reformation . There is its own Protestant parish, its parish church is the Kunibert Church . The Catholic parish of St. Dionysius in Neckarsulm is responsible for Catholic Christians. Since 1992 there is also a Catholic church building in the village with the Church of St. Francis.

On March 25, 2012, Bernd Bordon was elected mayor in the second ballot with 48.98 percent of the vote. His eight-year term of office began on June 1, 2012. The last years of office of his predecessor Jens Uwe Bock were marked by disputes between the mayor and the local council. Bock held the office from 2004 to 2012 and received only 6.2% of the vote in the 2012 re-election. 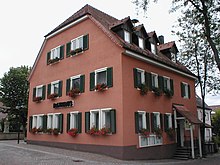 The municipal council has 14 members. The last local election on May 25, 2014 brought the following results:

Coat of arms of Untereisesheim

The blazon of the Untereisesheim coat of arms reads: In black, two diagonally crossed silver halberds. The flag of the municipality is white and black. 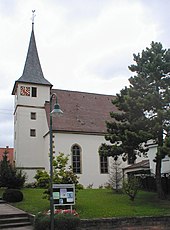 Untereisesheim is mostly residential community. The main jobs of the residents are Heilbronn and Neckarsulm . A number of medium-sized companies have settled in the Kressgraben industrial park since around 1985.

About 90% of the slightly over 200 hectares of agricultural land are used as arable land. The number of farms in the village fell from 16 to six between 1979 and 2007. Of these (as of 2007), two are full-time businesses and four are part-time businesses.

Untereisesheim is not far from the federal motorway 6 ( Saarbrücken - Waidhaus ), junction Heilbronn-Untereisesheim. With a traffic volume of more than 10,000 vehicles per day, the local passage ( state road  1100) is an enormous burden for the community. The planned bypass road was initially postponed by the Stuttgart regional council for financial reasons for an indefinite period of time.

The Public transport is covered by buses, a rail connection is not present.

The daily newspaper Heilbronner Voice reports on the events in Untereisesheim in its issue N, District North. The weekly newsletter of the community is published by Nussbaum Medien, Bad Friedrichshall.

There are two communal kindergartens in Untereisesheim.

The community library of Untereisesheim has a stock of 10,000 media.

Wikisource: Untereisesheim in the description of the Oberamt Heilbronn from 1865  - sources and full texts

Cities and communities in the Heilbronn district