The morphology (from ancient Greek μορφή morphé , German , shape ' ,' form ', and λόγος lógos , German , Word' , teaching ',' Reason '), also: Morphematik or Morphemik , is a linguistic sub-discipline whose object of investigation the word as the largest and the morpheme as the smallest unit. She examines the structure of words, their structure and regularity of structure.

The smallest meaningful units or units with a grammatical function ( morphemes ) are identified through a structuralistic approach ( segmentation , substitution and classification ) . It is classified according to the criterion of importance and independence.

In traditional grammar, morphology is called the theory of forms . They treated the word starting, analyzing the flexion forms and speech and also includes the word formation , which of course just not with word forms, but with word stems concerned.

The term “morphology” was adopted in the 19th century by linguists from another scientific discipline to describe typical word formation patterns. The expression originally comes from Johann Wolfgang von Goethe , who introduced it for the theory of forms, especially in botany . August Schleicher took it over in 1859 for linguistics. Leonard Bloomfield already used the term “morpheme” in his essay A set of postulates for the science of language (1926): “ A minimum form is a morpheme; its meaning a sememe ”.

The morphology, with its analytical methods and terms, is essentially shaped by US structuralism; Bloomfield (1933) and Zellig S. Harris (1951) dedicate their own chapters in their fundamental works.

The status of morphology has changed again and again, both with regard to the question of which areas of the language description are to be assigned to it, as well as with regard to its embedding in the rule systems of the various grammar models. To differentiate the morphology from the syntax s. the article on syntax . The border area between morphology and syntax is morphosyntax and researches the mutual influences of morphological and syntactic processes. The mutual dependencies between morphological and phonological processes, i.e. processes relating to speech sounds , are dealt with in morphonology .

Morphology as an examination of word structure in general usually includes word formation and inflection . However, some schools regard word formation as a separate discipline.

The main difference between inflection and word formation is that word formation creates new words, while inflection expresses the grammatical functions of the words in the sentence. The noun “(the) act” becomes the new word “crime” through word formation, for example through derivation with the prefix “un-”. However, inflection does not create a new word from “deed” in a sentence like “The deeds must be punished”, but the additional characteristic plural is indicated with the form “deeds” . Accordingly, “deed” and “crime” are two different words, while “deed” and “deed” represent two forms of the same word. The same case applies to “write” and “describe” (two words) or “write” and “write” (two word forms). Inflection features can also be more or less meaningful (for example in the case of the plural).

Distinction between word formation and inflection can arise when the same grammatical / semantic functions are expressed in inflection and word formation. In German, the grammatical gender ( gender ) is such a category: On the one hand, there is gender inflection in articles, adjectives and pronouns, that is, words are inflected differently depending on the grammatical gender or "der", "die" and "das" are inflected Forms of definite article; on the other hand, nouns also have a gender derivation: through word formation with the suffix “ -in ”, “lion” becomes the feminine form “lioness”. The difference between inflection and word formation is that the occurrence of inflection is also the subject of grammatical rules: an article must always be inflected when it is used in a sentence; As a rule, however, only a few nouns can be changed by deriving their gender; In any case, these behave like independent words, and the choice is made purely according to the intention of the message.

The terms " morph ", " allomorph " and " morpheme " are names for the smallest meaningful or functional components of a word. The units that have not yet been classified in terms of their type are called morphs. For example, are the words "teaching it", "child-er" and "Größ-er" three -er -Morphe ago. Only after their function and meaning have been determined can they be assigned to certain morphemes: the -er in "teacher" is used to form the masculine " noun agentis ", -er in "children" to form the plural and -er in "larger" for Formation of a comparative .

If morphs with different shapes have the same function, they are so-called allomorphs of a certain morpheme. For example, the affixes encode -er in “children”, -e in “dogs”, - (e) n in questions , -s in “cars”, but also the null morpheme , as in “der / die Wagen”, to German Nouns appended plural; they are thus allomorphs of the plural morpheme. If different morphemes have the same shape, then it is a case of syncretism .

Rules of inflection and word formation 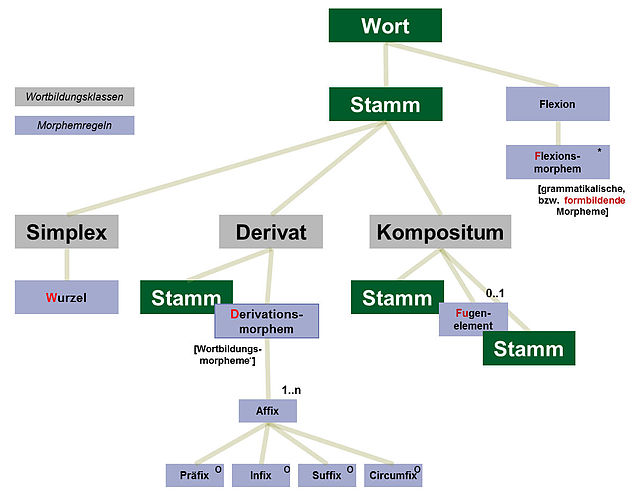 A distinction can be made between different procedures or rules that can be observed in inflection and word formation.

Inflection includes conjugation and declination . Many authors also count the increase, comparison to the inflection.

At the Grundmorphem service water is e attached as Flexionsmorphem for the first person singular present indicative active.

In some theories, however, inflection is not assigned to a separate level of morphology, but rather incorporated into the area of ​​syntax, since the appearance of inflection is subject to syntactic rules.

Derivation describes word formation through a combination of word stems and affixes .

To the Grundmorphem health is integral attached, a derivational to adjectives to convert them into nouns. In the formation of the word friendliness the affix is -keit to an already assembled strain friend-lich added.

Composition means the formation of words from (usually) two stems, which can themselves be complex. The constituents can in turn be compounds or derivative products.

By combining the Grundmorphems language (s) with the resulting from Derivation word science (derivation of knowledge , this is made up of scientific + s ) results in a compound. In the case of Dreifachkompositums shipping company is between the compound navigation and the Simplex society the linking element -s inserted. Another joint element is -e- as in Schwein-e-roast (mainly in Germany, on the other hand Schwein-s-roast mainly in Austria). In the cases of linguistics and school yard , the final word is deleted from the first basic morphemes language and school .

A distinction is made here between:

The formation of a new word simply by changing the part of speech of an existing word or word stem is called conversion. Conversions are e.g. B. Infinitives of verbs that are converted into nouns without adding an affix. Conversions of nouns into verbs are also possible, as well as conversions of adjectives into verbs.

Here, two existing words merge into a new one. The starting words are no longer fully recognizable.

From the point of view of computer science , many morphological phenomena can be formally described with regular expressions , especially if they consist purely of affigations without further changes to the material. However, some phenomena, such as the Arabic derivative morphology , cannot be captured with regular languages.