Desastres de la guerra or The horrors of war is a series of 82 graphics by the Spanish painter Francisco de Goya , which were created between 1810 and 1814. The aquatint - etchings portray the atrocities committed by the soldiers of Napoleon in battle with the rebellious Spanish population against the French occupation . 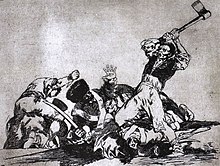 The pictures show crimes against humanity on both sides, rape, shootings, massacres, mountains of corpses, half-dead. The clergy are identified as warmongers .

The draftsman and etcher Jacques Callot , who published the invasion of Lorraine by Cardinal Richelieu's troops in a series of 18 etchings under the title Les misères de la guerre (The Abominations of War) in 1633 , had commented on the events depicted in commentary texts. Goya refrained from commenting. 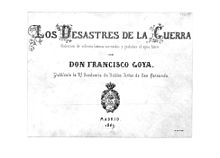 The etchings were not published during Goya's lifetime. The first edition did not appear until 1863 (Ed. Real Academia de Bellas Artes de San Fernando ), others followed in 1892, 1903 and 1906.

In 1983 an orchestral work of the same name by the composer Michael Denhoff was created , which refers to seven pictures in this graphic cycle by Goya.