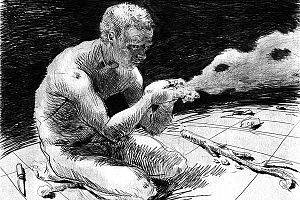 The drypoint is a graphical gravure printing process , a possible form of etching .

With drypoint etching, the drawing is scratched directly into the printing plate ( cold deformation of the metal) using a steel needle set in wood or a slightly heavier etching needle made of solid steel . A stronger pressure on the needle also creates a stronger line. The weight of the massive eraser makes the drawing work a little easier, which is associated with effort due to the metal resistance. The displaced material stands up on both sides of the grooves and forms a sharp ridge (which is removed as a chip during copper engraving ). All surfaces consist of a concentration of many lines. No etching follows. As with etching, printing ink is then applied over the entire surface of the plate and then wiped off again. In the process, paint remains in the fine ridge next to the actual line in addition to the groove. On the print, the line shows up as an increased build-up of paint, the ridge as a fine incision, which sometimes even remains white, and a velvety shade that adjoins the ridge, which reproduces the color that stuck to the outside of the ridge when wiped. The resulting painterly effect is the distinguishing feature of the etched line of the etching.

The technique is of great artistic importance because it communicates the subjective personality of the artist and his expression. It was first used by the caretaker around 1480 . Rembrandt combined the drypoint with the etching technique and in this way masterfully broadened and combined the tonal range of both printing techniques. In the 18th century, Jacques-Philippe Le Bas and his students completed the combination of copperplate engraving and reworking with drypoint technology. In the 20th century, alongside Edvard Munch , Ernst Ludwig Kirchner and Max Beckmann, it was above all Picasso who created impressive works with this technique.

Features of a drypoint etching

In general, only a small number of good prints from the printing plate are possible with drypoint etching, as the pressure of the press squeezes the burr more and more together and the finely shaded tone gradually disappears. It is therefore important for the collector to purchase a sheet with a low number of prints.

The diamond dry point (ger .: diamond-drypoint ) is a special technique of drypoint. It is carried out with a single tool: an extremely sharp-cut diamond that is set in a drawing pen, which is used to engrave directly into the bare copper plate . The word "diamond drypoint" describes both the tool and the erasing technique carried out with it, which also includes a special printing technique. The diamond drypoint simultaneously combines the possibilities of graphic and painterly variation in gravure printing , which otherwise can only be achieved by combining different techniques and in separate work steps.

Characteristic of the diamond drypoint is the richness of the tonal gradations, fine gray values ​​and saturated, velvety depths, as well as the changing transition from the graphic-abstract symbolic to the painterly-optical, as well as the subtlety of the line, up to the limit of differentiation (10 lines / mm , corresponds to 250 dpi and more). There is lifted no chip, as with the graver in engraving raised and no rough jagged ridge, as with the steel tip of classical drypoint. The diamond tip evenly pushes the soft copper to the side and does not get caught in the plate. It transfers every pulse of the hand, like a seismographic record, to the pressure plate.

Printing from the copper plate, which is usually stolen, is difficult because of the extreme delicacy of the engraving. The printing ink is built up in several stages, whereby the temperature of the plate and the viscosity of the printing ink must be precisely matched. The pressure plate allows - as the Etching - a circulation of up to 30 prints. Steel plates also allow higher editions.