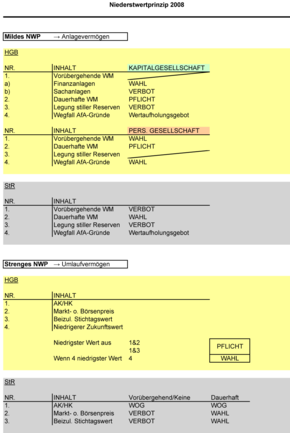 AfA regulation according to commercial and tax law, legal status 2008

This general principle of prudence results in two opposing valuation principles for both sides of the balance sheet: While liabilities (debts) are recorded at the highest possible value ( maximum value principle ), assets (assets) according to Section 253 (1) sentence 1 HGB must be of the two possible valuations ( market value or amortized cost ), the lower one can be selected.

The company's assets are accordingly written down to the value at which they could be sold on the balance sheet date . The meaning of the lowest value principle is to show unrealized losses and thus protect creditors .

The extended lower-of-cost-or-market principle meant the regulation applicable until 2009, according to which current assets can be depreciated due to future fluctuations in value. This variant no longer applies due to the Accounting Law Modernization Act of May 25, 2009.

If the value of non-depreciable parts of the fixed assets increases again in later financial years or if the reasons for the depreciation no longer apply, a write-up must be made, whereby the new valuation must not exceed the amortized cost ( Section 253 (5) HGB). The previously existing right to write-up for partnerships no longer exists since the Accounting Modernization Act came into force.

In the tax balance sheet , depreciation to the lower partial value can only be made in the event of an expected permanent decrease in value , Section 6 (1) No. 1 and No. 2 EStG . Since the revision of Section 5, Paragraph 1, Sentence 1, last Hs. EStG, tax options - such as the use of the lower current market value - can be exercised independently of the use in the commercial balance sheet. The obligation to depreciate to the lower value up to the BilMoG due to the relevance according to § 5 Abs. 1 S. 1 EStG therefore only applies in old cases.