View over the eastern section of the prospect behind the New Arbat Bridge; Hotel Ukraine on the right

One of the houses in the style of socialist classicism

The Kutuzov Prospect ( Russian Кутузовский проспект ) is a main street in Moscow ( Russia ) and the initial section of the M1 trunk road (Moshaisker Chaussee) . 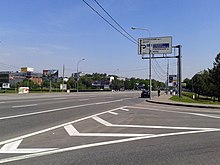 The last kilometer of Kutuzov Prospect. View from the Moshaisk Highway.

The prospect is 8.3 kilometers long and extends from east to west between the New Arbat Bridge over the Moskva to the confluence of the two streets Rubljower Chaussee and Aminjewoer Chaussee, after which it continues out of town under the name Moschaisker Chaussee. The eastern sections of the prospectus belong administratively to the Moscow district of Dorogomilowo and the part west of Victory Square to the district of Fili-Davydkowo , both in turn to the administrative district West . The entire prospectus is heavily developed for traffic, the carriageway has eight to ten lanes and is free of intersections at the same level. Numerous lines of city and intercity buses as well as trolleybuses use the prospect , and the underground stations Kutuzovskaya , Park Pobedy and Slavyansky Bulwar have exits to the Kutuzov prospect.

Until the early 20th century, the section of today's Kutuzov Prospect west of the Moscow city limits (this crossed the Prospect about one kilometer west of the banks of the Moscow River) was called Moshaisker Chaussee (Russian Можайское шоссе ), as this road was the most important connection between Moscow and the city of Moshaisk as well as further west with Smolensk , Minsk and ultimately with large parts of Europe. Within the city limits the leadership of Moschaisker highway deviated from the present leadership from the prospectus: Into town travelers arrived after passing the city limits about today's Great Dorogomilower road ( Большая Дорогомиловская улица ) to the city center, where they the Moskva River on the Borodino bridge crossing and could get further over the old Arbat to the Kremlin . The section of the Kutuzov Prospect east of the former city limits, which runs almost parallel to the same north of the Große Dorogomilower Straße, was not moved until 1957. At the same time, the New Arbat Bridge was built and to the east of it as a continuation of the Kutuzov Prospect towards the city center, the New Arbat . The construction of the New Arbat and the eastern section of the Moshaisker Landstrasse, in which entire districts were leveled in places and smaller alleys completely or partially dissolved, resulted in a straight, multi-lane road connection between the Kremlin and the western outskirts of Moscow (including with the formerly independent towns Fili and Kunzewo ).

Also in 1957, the prospectus got its current name in honor of Mikhail Kutuzov , an important military leader in the war against Napoleon in 1812 , when the Moshaisker Landstrasse played a key role in the defense of Moscow from the French approaching from the west. Some buildings on Kutuzov Prospect are still reminiscent of the events of 1812, such as the round building of the Borodino Panorama Museum (house 38 on Kutuzov Prospect) erected for the 150th anniversary of the Battle of Borodino , as well as the ensemble of Victory Square nearby with the monumental triumphal arch based on a design by Joseph Bové . The section of the prospect west of the triumphal arch was renamed Prospect Marschala Grechko (Russian Проспект Маршала Гречко ) in 1976 in honor of the recently deceased Soviet Defense Minister Andrei Grechko , but was again part of the Kutuzov prospect in 1992.

As an important arterial road in Moscow, the Kutuzov Prospect was intensively built on in the style of socialist classicism from the 1930s onwards, with high-ranking party officials and statesmen often housed in particularly representative residential buildings (e.g. houses 21, 22, 23, 24, 26, 35) down (in the 1970s and 1980s including Shcholokov , Brezhnev and Andropov ). For this reason, the prospectus was long considered the most prestigious residential area in the Soviet Union and is still known today for its extremely expensive residential and office space. In addition, the street is still regularly used by statesmen (for example by the president on the way between the Kremlin and the residential residence west of Moscow). Due to the large number of lanes and the fact that there are no intersections, there are rarely traffic jams here, unlike other major streets in Moscow .

A particularly striking building of Socialist Classicism on the prospect is the Hotel Ukraine , completed in 1957 , which opens the prospect from the New Arbat Bridge from the west. It is one of the “ Seven Sisters ” built in the post-war years , and thus a symbol of Moscow architecture of the Soviet era.