Horw (pronounced Horb [hɔrb] ) is a municipality in the Swiss canton of Lucerne . It is in the Lucerne-Land constituency .

Horw is a southern suburb of the city of Lucerne and is located on Lake Lucerne at the foot of Mount Pilatus . Horw includes the Bireggwald (a high forest originally named after its birch trees ) in the northeast and the Horw peninsula in the east of the municipality, as well as the (alluvial) area west of the two and areas on the Pilatushang.

The rather large Bireggwald lies between the village and the south-eastern quarters of the city of Lucerne (including Matthof and Hirtenhof). To the north-west of it is the Biregg district, which politically belongs to Horw, but has grown together with the city of Lucerne.

With the exception of the Dickiwald, the Horw peninsula has been almost completely cleared. There are numerous settlements on the shores of Lake Lucerne. The largest are the districts of St. Niklausen in the east and Kastanienbaum (with Villa Krämerstein ) in the southeast of the peninsula. In Felmis / Halt, south of the Bireggwald in the north of the peninsula, a large new district has been built in recent years.

The village of Horw with the parts Waldegg, Althof and Rank has grown and urbanized considerably in the second half of the 20th century and is traversed by several streams. To the southeast of the village, on the northwest corner of the peninsula, lies the Winkel an der Horwer Bucht. Winkel and - to the west of it - also located on the Horwer Bay district of Ennethorw have grown together with the village due to the brisk construction activity.

Ennethorw is at the foot of the Pilatus slope. This is largely forested and numerous streams flow through it. The largest are the Steinibach, which flows through Horw-Dorf and flows into Lake Lucerne in the delta in the Horw Bay, and the Wiedenbach, which flows into the lake on the west bank of the Horw Bay. The forest area that separates the communities of Horw and Hergiswil NW is called Haltiwald .

The municipality covers an area of ​​more than 20 km². Of this, however, only 1287 hectares are land. One third (32.4%) of this is used for agriculture. Around a quarter (24.1%) is settlement area. The Bireggwald and forests on the Pilatushang cover 42.4% of the community area.

Horw borders Lucerne in the north, Kriens in the west and Hergiswil NW (also called Hergiswil am See ) in the south . The Vierwaldstättersee forms a natural municipal boundary in the south and east.

The population uses a highly Alemannic dialect as their everyday language. In the last census in 2000, 86.47% said German, 2.32% Italian and 2.01% Serbo-Croatian as their main language.

The entire population used to be members of the Roman Catholic Church. This has changed as a result of leaving the church and immigration from other regions in Switzerland and abroad. The religious landscape looks today (as of 2000) as follows. There are 64.46% Roman Catholic, 15.06% Evangelical Reformed and 1.70% Orthodox Christians. In addition, we find 8.63% non-religious, 3.73% Muslim and 1.07% followers of other non-Christian religions. The majority of Muslims are Bosniaks and Albanians from Kosovo and Macedonia. There are also some Turks and Kurds. The majority of the followers of other non-Christian religions are Hindus of Tamil origin. 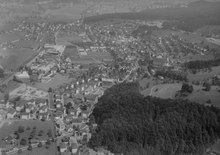 The history of Horw's settlement is much longer than recorded in historical writings. Finds from prehistoric times (including the Stone Age and the Bronze Age ) were recovered in the municipality .

The first written mention of the place dates from 1231 ( bona nostra apud Horwe sita, our goods located near Horw). Horw is a secondary settlement name that goes back to a field name: Old High German horo, in the locative dative (ze) hor (o) we, means " swamp " or " moorland ". The community was part of the property of the Hofkloster zu Luzern. The name was first mentioned in the form of Horwe in 1231, when Walther von Hochdorf and his wife Berta bequeathed their property to the court monastery. In 1291 the Habsburgs became the new masters. After the battle of Sempach , the city of Lucerne took over the high jurisdiction in 1395, and in 1425 also the lower. Horw is obliged to pay a large sum of money because it faced the city of Lucerne in the Peasants' War in 1653 . At that time there was a skirmish at Winkel between the rebellious farmers and the troops of the city.

When Switzerland was conquered by the French in 1798, troops were billeted to subdue the rebellious Nidwalden. Up until this year Horw was administered as part of the Kriens Landvogtei. Until 1803 it belonged to the district of Lucerne, since then to the office of Lucerne . In the years 1844 and 1847, troops were again stationed in Horw (free troops and federal ones).

The concerns of the population are represented by a residents' council. It consists of 30 members and is elected every four years by proportional representation. The L20 is an independent red-green list.

The five municipal councils for the 2016-2020 legislative period are:

In Horw there are four primary school centers (Hofmatt, Kastanienbaum, Allmend and Spitz) and one school center for secondary level I.

The building technology department is unique in Switzerland. It is divided into three fields of study: heating-ventilation-air conditioning (HVAC), heating-sanitary (HS) and building electrical engineering (EE). Every year around 25 engineers from all over the country complete this training. Your professional future lies mainly in the planning and implementation of various building technology in the construction industry.

The community has excellent public transport connections. It is located on the Luzern - Interlaken (with S-Bahn line 5 Lucerne - Giswil), popularly known as Brünigbahn , and Lucerne - Stans - Engelberg (with S-Bahn line 4 from Lucerne to Wolfenschiessen) of the Zentralbahn and has the S-Bahn stops Horw and (since December 2004) Kriens-Mattenhof, which is located in the municipality of Kriens , but mainly opens up the Horw Brändiquartier. In addition to rail, there are various bus routes. The Biregg district in Lucerne, which is politically part of Horw, can be accessed by line 7 of the Lucerne trolleybus . It is operated by the Verkehrsbetriebe Luzern (VBL) and runs from the Biregghof via the Lucerne train station to the Wesemlin district. The quarters on the Horwer peninsula are integrated into the public transport network by bus line 21 (Kriens Zentrum-Pilatusmarkt-Horw Bahnhof-Kastanienbaum-St. Niklausen-Luzern Bahnhof). The main line is line 20 (Luzern Bahnhof-Horw-Ennethorw / Technikum). Since the timetable change in December 2013, bus line 14 has run from Horw Zentrum via the Pilatusmarkt shopping center, the Schlund industrial park in Kriens and along the eastern border from Kriens to Lucerne and on to the St. Anna Clinic (Lucerne) and the Würzenbach district in Lucerne. Line 16 connects the Spitz- and Rainliquartier in Horw via Horw Zentrum, the Pilatusmarkt, the Schlund industrial park and the Kuonimatt with the center of the neighboring municipality of Kriens.

Horw is on the main road Lucerne-Sarnen-Interlaken or Lucerne-Stans-Engelberg (common to Hergiswil NW). It has the Luzern-Horw motorway connection in the Schlund area on the A2 . For certain districts, the motorway connections Luzern-Kriens and Luzern-Zentrum - both also on the A2 - are important.

Horw is one of the most tax-efficient municipalities in the Canton of Lucerne.

Political communities in the Lucerne-Land constituency