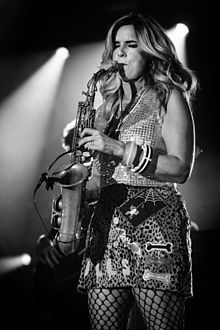 Candy Dulfer (born September 19, 1969 in Amsterdam ) is a Dutch saxophonist and singer whose style is predominantly funk .

At the age of six, Dulfer started playing the saxophone, especially the soprano and alto saxophone - supported by her father Hans Dulfer , who is himself a well-known saxophonist . Dulfer was also influenced by the saxophonists Sonny Rollins and David Sanborn . A first record followed at the age of eleven and finally the first own band Funky Material at 14 .

Dulfer's breakthrough came in the late 1980s / early 1990s, initially with the single Lily Was Here (1989) from the soundtrack to the film of the same name, which she recorded with Dave Stewart ( Eurythmics ). In 1990 she also released the album Graffiti Bridge , on which Dulfer can be heard as the accompanist for Prince , as well as Dulfer's own album Saxuality , which earned her a nomination for “Best Pop Instrumental” at the Grammy Awards . Furthermore, Dulfer appeared in 1990 with the band Pink Floyd in Knebworth . She worked with her father Hans on the album Dulfer Dulfer .

In addition to her solo recordings, Dulfer has been a sought-after accompanist ever since. In addition to her collaboration with Prince, she has appeared in the studio and on stage with Maceo Parker , Dave Stewart, Marcus Miller , Van Morrison and Blondie, among others .

Since May 18, 2012 Dulfer has been hosting the show Candy Store for the Dutch radio station Sublime FM (formerly Arrow Jazz FM) , in which she presents her personal favorite pieces from funk, soul and jazz.