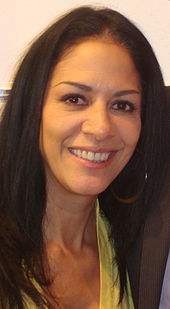 Sheila Cecilia Escovedo (born December 12, 1957 in Oakland , California ) is an American percussionist , drummer and singer . She gained international fame in the 1980s through her collaboration with the musician Prince . In 1985, A Love Bizarre was their most commercially successful single.

Sheila Cecilia Escovedo was born in Oakland in 1957. She is the eldest daughter of the percussionists Pedro "Pete" Escovedo (born July 13, 1935) and Juanita Gardere (born October 21, 1936), who has African ancestors. Sheila E. has two younger brothers, Juan (born March 13, 1959) and Peter Michael (born July 7, 1961) and a younger sister, Zina (born November 26, 1967). Her brother Peter Michael also plays percussion, her father was the drummer and percussionist with Carlos Santana and Lionel Richie , among others ; her uncle is the Texan singer and songwriter Alejandro Escovedo .

At the age of 18 years, Sheila E. was with Carlos Santana engaged ; since he was already married, she ended the relationship. She was engaged to Prince from 1987 until the partnership separation in 1988 , but she also ended this relationship. Both partnerships remained childless and both engagements were kept secret from the public by the respective couples at the time. It was only in September 2014 that Sheila E. made this known in her autobiography The Beat of My Own Drum .

Sheila E. is the aunt of Nicole Richie , the daughter of her brother Peter Michael. She is also Tito Puente's goddaughter .

Sheila E. learned to play congas at the age of five , and when she was 15 she joined the band Azteca , where she sang and played percussion . Your record-debut in 1976 on the album Yesterdays Dreams by Alphonso Johnson . During this time she also played in the backing band of Diana Ross , George Duke , Herbie Hancock , Lionel Richie and Marvin Gaye . After that she played for three years exclusively in the backing band of George Duke. She then recorded two studio albums with her father Peter Escovedo, and later toured or recorded albums with, for example, Billy Cobham , Diana Ross, Herbie Hancock, Marvin Gaye, Narada Michael Walden , Patti LaBelle , Spyro Gyra and George Duke.

In July 1978, Sheila E. and Prince saw each other for the first time at an Al Jarreau concert without speaking to one another. They only met again on November 20, 1979, when Prince started his then Prince tour in Los Angeles , California at The Roxy . Backstage, Prince revealed to her that he knew her. 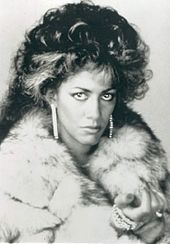 Prince was also busy in February 1984 to complete a studio album for his then side project Apollonia 6 . But the then front singer Apollonia Kotero showed less and less interest in the album, so that Prince got the idea that Sheila E. could also record her own album. He gave her the stage name Sheila E. - until then she had performed under her name Sheila Escovedo. “He [Prince] had so much material that he wanted to record. But he did n't want Warner to know anything about his plan, ”said then sound engineer Terry Christian.

On June 4, 1984 Sheila's debut album The Glamorous Life was released on the Warner Bros. Records label. The album reached gold status in the USA, but did not play a major role in the international charts. Prince is nowhere mentioned on the album cover, but wrote all the songs on the album under his pseudonym "Jamie Starr". From November 4, 1984 to April 7, 1985, Prince and The Revolution were in the USA with the Purple Rain tour , on which Sheila E. appeared in the opening act . The tour was very successful commercially, the 98 concerts were attended by approximately 1.75 million people.

When the American Music Awards took place in the USA on January 28, 1985 , the relationship between Sheila E. and Prince took on strange traits at times; Cyndi Lauper recalled that Prince's bodyguard had urged the guests to turn around because Prince's friend was coming. It turned out to be Sheila E.; but “nobody should look at them. And that's what he [the bodyguard] said to Stevie Wonder ! ”.

After completing the Japanese part of the Lovesexy Tour from February 1 to February 13, 1989, Sheila E. had health problems. In a 2013 interview with Welt.de , she said that she did not take care of her body. “Today I know that as a percussionist you have to train like a top athlete. If you don't do that, play like a maniac every night and wear high heels , one day your body will take revenge. In my case, the left side of my neck. It was just broken. [...] Paralysis in the legs, back pain, even a lung collapsed. I was scared of dying. ”Aside from her health problems, she no longer liked the music Prince had written after 1988. "I just didn't want to be around him," Sheila E. said after Prince's death in an interview with Billboard magazine on April 26, 2016. Her decision at the time was "like a divorce" and the hardest of her life, she said .

It was not until 1991 that Sheila E. recorded a new album with Sex Cymbal , which, however, was not commercially successful. In 1998 she was the band leader of the US talk show The Magic Hour , which was hosted by Magic Johnson . The talk show only ran from June to September 1998. In the same year Sheila E. played the percussions on the song True Colors , the cover version of Phil Collins . In 2000 she went on tour with the Japanese artist Namie Amuro . In 2001, 2003 and 2006 she toured with Ringo Starr and was a member of his supergroup Ringo Starr & His All-Starr Band.

In 2010 and 2011 she again accompanied Prince on tour, this time on his 20Ten tour and on the Welcome 2 America tour. On May 21, 2011 Sheila E. performed live with Prince for the last time. The concert took place in San José, California at the SAP Center .

On November 4th, 2013 Sheila E. released her seventh studio album called Icon and then went on a world tour with Larry Graham . In September 2014 she released her autobiography , The Beat of My Own Drum .

On June 26, 2016, the BET Awards took place in the Microsoft Theater in Los Angeles , California , at which Sheila E. played a medley of some of his songs in memory of the musician Prince, who had died two months earlier . A day later, she released the song Girl Meets Boy , the lyrics of which are a tribute to Prince. In July 2016, Sheila E. went on a world tour again and the US music magazine Rolling Stone chose her as one of only five women among the 100 best drummers of all time in 58th place.

In September 2017, Sheila E. released her album Iconic: Message 4 America , on which she made covers of songs such as Blackbird (1968) and Come Together (1969) by The Beatles , Inner City Blues (Make Me Wanna Holler) (1971) by Marvin Gaye , Pusherman (1972) by Curtis Mayfield and America (1985) interpreted by Prince. She also sings a medley of James Brown songs. Her father and her two brothers are guest musicians, as well as Bootsy Collins , Candy Dulfer , George Clinton , Greg Phillinganes , Israel Houghton and Ringo Starr , among others .

2019 worked as a percussionist Sheila E. in the published in February Album This Land of junior Gary Clark as a guest musician with and in October was her single No Line with Snoop Dogg released.

On the occasion of the Grammy Awards 2020 , a tribute concert for Prince took place on January 28, 2020 in the Los Angeles Convention Center in Los Angeles under the motto "Let's Go Crazy: The Grammy Salute to Prince", at which Sheila E. and Beck , Common , FKA twigs , Gary Clark Jr. , HER , Juanes , Miguel , St. Vincent and Usher . The concert was broadcast on US television on the fourth anniversary of Prince's death on April 21, 2020.

Sheila E. as an actress

1985 Sheila E. worked as an actress in the movie Krush Groove . Director Michael Schultz began shooting on May 5th and finished it on May 31st, 1985. For Sheila E., however, this time did not remain in good memories; for example, she claims to have heard Schultz shout "Cut!" when she wanted to perform the song A Love Bizarre for a film scene. "Lots of people on set and lots of rappers weren't very cool," she said later.

In 1987 she played drums in the concert film Prince - Sign O 'the Times , which hit US theaters in November. The film received some excellent reviews.