The terminology varies. The term «Fraktionsgemeinde» was first found in 1889, when the communal taxes in Davos Platz were redistributed between the parish and [the] parliamentary parish , and is also currently, for example, in the statutes of the Fraktionsgemeinde Monstein from December 7, 1996 (partially revised on December 3, 2010), the annual reports of the Davos Platz parliamentary group and the Davos website. The Graubünden municipal law of April 28, 1974 (also in the more recent transitional provisions in Article 110) speaks of "parliamentary groups", as does the Davos municipal constitutions of 1901 and 2019.

The last remaining parliamentary group, Monstein, is recognized in the Constitution of the Davos community of 2019 as a “public-law regional body” [Community executive] need ». Functionally, the Monstein parliamentary group is a corporation ; Accordingly, it defines itself in its statutes as an “independent, economic, public corporation within the meaning of and within the limits of cantonal laws”. Today (2020) it is responsible for the following four tasks, all of which are private law : It owns a brewery building, the old church , the saw on Oberalpigerbach and a community freezer. To finance it, it rents the brewery building to Biervision, the saw is leased to the Gysin joinery , the freezer is financed by renting around fifty freezers, and the old church houses a Swisscom antenna in the tower , which generates significant annual income.

Until well into the 19th century, the Davos landscape (at that time still without the current district of Davos Wiesen) was divided into 14 neighborhoods (seven in the upper section and seven in the lower section) and five Protestant-Reformed parishes , which were also school communities . The modern political community was formed from the former in 1878 . On July 1, 1889, church and state were the first parliamentary group in Davos Platz to be financially separated, so that in addition to the five parishes (whose members were the Reformed Churches belonging to the Graubünden regional church) there were now five new «parliamentary groups», each of which acted as resident communities, each with its own funding . The final separation took place in the following years, when separate statutes were issued for the parliamentary groups and the parishes (in Davos Platz for example on September 4, 1892). At community level, they are mentioned for the first time in the Davos Landscape Constitution of April 21, 1901 (as “administration of the parliamentary groups”). At that time, the political community (landscape) delegated to the parliamentary groups in particular the establishment of primary schools and kindergartens, the organization of the fire brigade and the funeral service. The parishes lost their first important task when the parish took over the primary schools. In 2004 the kindergarten system was also centralized, and in 2008 the five fire brigades. The only task delegated by the congregation to the parliamentary groups was the funeral.

On August 31, 2006, the Graubünden cantonal parliament decided, on the occasion of the deliberation on the law on communal and church taxes, that existing parliamentary groups with their own regional authorities, which levy their own income and wealth tax on January 1, 2009, should only do this for a transitional period of ten for years to come, which deprived the Davos parliamentary groups of their livelihoods. Therefore, five of the now six parliamentary groups since the incorporation of Wiesen decided to dissolve on December 31, 2018. Since the Davos Monstein parliamentary group has tax-independent income on the one hand and four properties to be managed on the other, it is the only one that still exists today.

In terms of the church, the six parishes of Dorf, Platz, Frauenkirch, Glaris, Monstein and Wiesen each formed their own Protestant-Reformed parishes. More recently, Frauenkirch, Glaris, Monstein and Wiesen have been united to form the Davos Altein parish, so that there are still three Protestant Reformed parishes in the area of ​​the Davos political community. 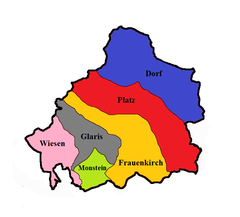 Fractional communities in the Davos landscape

The Davos landscape comprised six parishes at the end of 2018:

Davos Wiesen was only a parliamentary group of the Davos region from 2009, before it formed its own political municipality.

Statutes of the parliamentary groups (accessed on August 12, 2020):

Common portal of the parishes: