This article deals with the municipality in the canton of Lucerne. For the Schwinger see Matthias Sempach .

Sempach ( Swiss German Sämpech [ˈsæmpəχ] ) is a small town and municipality in the Swiss canton of Lucerne . It lies in the constituency of Sursee .

The town of Sempach is located at the southeast end of Lake Sempach . The southern and south-eastern municipal boundary runs along the Grosse Aa and the Kleine Aa . At the hamlet of Gottmännigen ( Neuenkirch municipality ) it changes north until shortly before Hildisrieden . From there the border goes north-west up the southern slope of the Eichberg to the vicinity of the source of the Rotbach and leads right through the Sempachersee golf course. Within the facility, the municipal boundary turns west and reaches the Morental forest at 735  m above sea level. M. the highest point of the municipality. From the Morentalerwald the border goes in a south-westerly direction down to the Sempachersee, which it reaches east of Eich .

There are several large forest areas in the municipality. The Allmendwald lies on the Kleine Aa, southeast of the town. To the north of him the Schwarzlachen, which is cut through by the A2 motorway. In the east of the community is the Steinibühlwald, in the west of which is the Steinibühlweiher . The Mussi forest grows north-east of the town. In addition, a considerable part of the banks of the Rotbach is forested.

68.7% of the municipal area of ​​895 hectares (not including the lake) is agricultural land. 16.3% is settlement area and only 14.5% is covered by forest and wood. Sempach borders on Eich , Hildisrieden , Beromünster and Neuenkirch .

The population uses a highly Alemannic dialect as their everyday language . At the last census in 2000, 93.8% said German, 2.18% Albanian and 0.75% Spanish were their main languages. 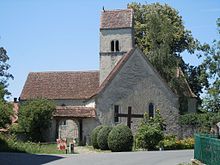 In the past, all residents were members of the Roman Catholic Church. Today (as of 2000) the religious composition of the population is as follows: There are 76.89% Roman Catholics ( Diocese of Basel ), 13.92% Evangelical Reformed ( Evangelical Reformed Church of the Canton of Lucerne ) and 0.32% orthodox christians. There are also 3.53% non-denominational, 2.47% Muslim and 0.43% followers of other non-Christian religions. The Muslims are of Albanian origin, the followers of other non-Christian religions Hindus of Tamil origin.

The city of Sempach on an engraving by Matthäus Merian , 1654

Sempach is first attested to in the first half of the 12th century. The name is a combination of Old High German semida "Schilf, Binse" and bach "Bach" and means "Schilfbach, Binsenbach". The transfer to the settlement by the stream is secondary.

As with all villages around Lake Sempach, the area was settled early on. This is proven by excavations in which Neolithic and Bronze Age pile dwellings came to light. The area was also inhabited at the time of the Romans and the Alemannic conquest (Roman settlement remains and Alemannic graves prove this). The place was first mentioned historically in 1150 in the deeds of the Muri monastery , the Acta Murensia . A short time later, the Habsburgs became the new masters of the community. It received city ​​rights from them around 1220 . Back then, the Habsburgs founded a number of small towns along the so-called Baslerstrasse to secure their way from Basel to Italy via Lucerne and the Gotthard Pass .

Threatened by the expansion policy of the city of Lucerne , the town joined it on January 6, 1386. In contrast to Rothenburg or Wolhusen, for example, it escaped destruction by the Swiss. The Habsburgs were furious after this act and decided to teach the town and the confederates a lesson. This led to the Battle of Sempach on July 9, 1386 , which brought the Habsburgs a heavy defeat. The Sempacher letter was negotiated here in 1393 . The fact that Sempach belonged to Lucerne was not recognized by the Habsburgs until 1415.

Until 1798, Sempach formed its own bailiwick with far more rights for citizens than in the rural communities. From 1798 to 1803 it was the capital of the Sempach district, then the then newly created office of the same name . The town lost much of its former importance as early as the 18th century when a new large road (Luzern-Neuenkirch-Sursee) was built on the left bank of Lake Sempach and from then on it was located off the main traffic axis. 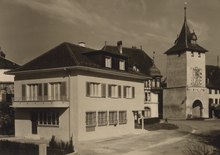 The Sempach Stadt post office was built in 1936 because the previous restaurant in the town had become too narrow. Post keeper Alois Lieb therefore intended to build a new building in front of the Lucerne Gate, but the municipal council objected to the post office being moved outside the town. But after the search for new premises within the walls failed, the resistance subsided and the new post office could be built. There was also an auto attendant in the building. This was enlarged in 1951, for which the use of space in the post office had to be optimized. The post office 6204 Sempach Stadt is still in the building today (2019).

The wall paintings in the former parish church of St. Martin in the Kirchbühl district , including the fragment of one of the oldest depictions of the legend of the " Encounter of the Three Living and the Three Dead ", were created around 1310. They are among the most extensive and oldest fresco cycles in one of the oldest churches in the canton of Lucerne.

The battle chapel Sempach on the road to Hildisrieden is a memorial to the Battle of Sempach .

In 2017, Sempach was awarded the Wakker Prize by the Swiss Homeland Security for the careful development of its historic town centers .

The Sempach City Council consists of five members and is set up as follows:

The community is connected to the public transport network by the Sursee – Eich-Sempach post bus line . The district of Sempach Station , which politically belongs to the neighboring municipality of Neuenkirch , has a train station on the Lucerne – Olten railway line , the train station is about 1.5 km from the center of Sempach. The place is located on the main road Lucerne – Sempach – Sursee and has its own motorway connection to the A2 .

With the Swiss Ornithological Observatory, the most important center for ornithology in Switzerland is also located in Sempach.

In Sempach there has been a tradition of riding around the driveway for over 400 years .

Political communities in the Sursee constituency