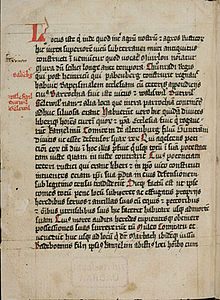 The Acta Murensia (full name: Acta fundationis monasterii Murensis ) are a Chartular chronicle in Latin that was written around the year 1160 by an unknown Benedictine monk . This is a report on the establishment and development of the Muri monastery in today's canton of Aargau in Switzerland . The Acta Murensia, which are partly based on older undated sources, are considered the main source for the early history of the Habsburgs , who founded the monastery.

The manuscript is the only longer record of the regional history of the 11th and 12th centuries in the Swiss plateau . It is divided into three parts: The first part consists of a pedigree of the Counts of Habsburg. The second part gives an insight into the history of the monastery at the time of the investiture dispute . The third part contains a detailed list of the monastery estates that were spread over a wide area between Alsace and Central Switzerland ; it also contains the first mentions of numerous parishes.

The original of the Acta Murensia has been lost, but a copy from the early 15th century has been preserved. It contains inserts and modernized place names by the also unknown copyist . For a long time only an incomplete translation of the manuscript was available; the penultimate source edition appeared in 1883. The Aargau State Archives , which is now owned by Acta Murensia, commissioned a new edition and a complete translation, which appeared in November 2012.