Wolhusen is a regional center. The specialty of the place is that it belongs to two different communities in the canton of Lucerne.

The village of Wolhusen has grown rapidly as a regional center in recent decades and also includes some areas that used to be separate groups of houses or homesteads. In the village, the Wolhuser Wigger (also called Wiggern) flows from the left into the Kleine Emme.

In contrast, the situation is very different in the hills and mountains to the west and south-west of the village. This area between Wolhuser Wigger in the north and the Flühbach , which flows into the Kleine Fontanne , and precisely this in the south is a region that consists of countless hamlets, groups of houses and individual farms and is grouped under the name Steinhuserberg . Many areas have been cleared there in the last few centuries, but there are also numerous large forests. The Wiggerenwald on the south bank of the Wolhuser Wigger is the largest and is located west of the village of Wolhusen. The traversed by a stream Stampfigraben and also flowed through by a stream thermal ravine , both southwest of the village, and the Geierbühlwald on the western border of the municipality are the next largest wooded areas. This part of the community is also where the highest elevations can be found. The highest point in the municipality is the Hochwart ( 1016  m above sea level ) north of the Flühbach in the south-west of the municipality, the Fluh ( 945  m above sea level ) east of it and the Steinhuserberg ( 820  m above sea level ) west of the Little Emme.

The municipal boundary often follows waters. These include the Kleine Emme, Grosse and Kleine Fontanne , the Flühbach, the Wolhuser Wigger and the Schwarzenbach .

View of the Wolhusen parish hall

Wolhusen in the center: the roundabout 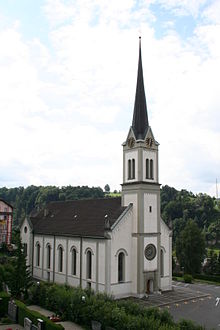 View of the cath. church

Look at the ref. church

The population uses a highly Alemannic dialect as their everyday language. In the last census in 2000, 92.44% gave German, 2.55% Albanian and 1.10% Serbo-Croatian as their main language.

In the past, all residents were members of the Roman Catholic Church. Today (as of 2000) the religious composition of the population is as follows: There are 76.36% Roman Catholic, 8.39% Evangelical Reformed and 1.30% Orthodox Christians. In addition, there are 5.19% Muslims and 3.82% non-denominational. The Orthodox are Macedonians, Montenegrins and Serbs. The majority of the Muslims are Albanians; but there are also many people of Turkish and Kurdish origin among them.

The place was first indirectly mentioned as Vuolhusen in 1070, when a member of the Freiherren von Wolhusen became abbot in Einsiedeln monastery. The barons of Wolhusen were one of the most powerful ruling families in the region. They were responsible for the Rottal and the entire Entlebuch, as well as the Bernese communities of Schangnau and Trub. Around 1300 they sold their property to the Habsburgs . These appointed bailiffs who came into conflict with the Lucerne and Entlebuchers. On January 3, 1386, they attacked Vogt Peter von Thorberg and destroyed both of his castles. After the Battle of Sempach in the same year, the Habsburgs lost control of the area. From 1389 they pledged the community to the city of Lucerne , which in 1405 gained full control over Wolhusen. The community belonged to the Ruswil bailiff until 1798, then to the Ruswil district until 1803 and then until 1814 to the newly created Entlebuch office . Since then it has belonged to the Sursee Office as a border community .

The Wolhusen municipal council consists of six members and is set up as follows:

Wolhusen is a traffic junction. The railway lines Lucerne-Bern and Lucerne-Langenthal branch out here . The Wolhusen-Doppleschwand-Romoos-Holzwegen and Wolhusen Spital bus routes and the Wolhusen-Ruswil route (with a connection to Buttisholz, Sursee) also operate .

Wolhusen is also an important place for private traffic. Roads go from here to Lucerne, Ruswil (into the Rottal), into Entlebuch (and from there to Thun and Bern) and towards Willisau. The nearest motorway connections are in Dagmersellen 21 km away and Emmen (north and south) 20 km away. These are on the A2 .

The first built Re 620 mainline locomotive of the SBB with the road number 11601 (former designation Re 6/6 ) bears the coat of arms of the municipality Wolhusen on the side.

In the ossuary above the parish church of St. Andreas, an excellently restored dance of death cycle can be seen, which experts consider to be the best quality in central Switzerland (except for Lucerne). On the long walls of the chapel, four representatives of the clerical and secular authorities face each other (pope, cardinal, bishop, priest as well as emperor, king, elector, nobleman), while four representatives of the lower classes are depicted on the gable side (landlord, usurer, Baker, monk). It is unusual that the 17 painted figures of death have real skulls on them with the head turned to match the scene. The four-line verses contain the laments of the dying and occasionally also monologues of death.

The Wolhusen Tropical House is located on the Hiltenberg outside the village .

Political communities in the Entlebuch constituency