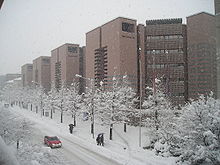 The Banca del Gottardo was a Swiss bank based in Lugano in the canton of Ticino .

The bank was founded in 1957 as a universal bank. As early as 1963, the majority of the shares went to the Milanese Banco Ambrosiano . After the Italian parent company collapsed, she joined the Japanese Sumitomo Bank in 1984 . After branches had already been opened in Nassau and Luxembourg in the 1970s, another followed in Monaco in 1994. Commission income from asset management and securities trading as well as syndication and issuing business were the main sources of income. In 1999, Banca del Gottardo was taken over by what was then Rentenanstalt (now Swiss Life) for CHF 2.4 billion .