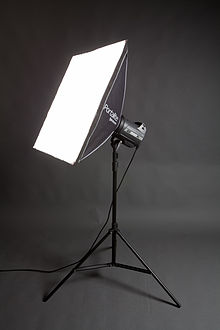 Back of flash head Elinchrom

The flash system is the professional version of the flash unit . It is used for the controlled illumination of objects.

In addition, there is usually a tripod on which the flash heads are mounted, as well as a flash sync cable , a radio trigger , or a photodiode (photo cell) for synchronized triggering.

In the lightning generator , the energy required for lightning is converted from the mains current in capacitors to a higher voltage (approx. 500 volts) and stored. When triggered, the control electronics deliver the desired amount to the flash head . There the electric current is converted into light by gas discharge. Most flash systems still have a permanent light (" modeling light" or "pilot light") available in order to be able to assess the light characteristics of the light former used.

The light shapers are attached to the lamp head in order to create different light characters. There are u. a. Normal reflectors , wide-angle reflectors , parabolic reflectors , Fresnel lens spotlights , light troughs with fabric diffuser, or plexiglass diffuser and fiber optic cable for illuminating the smallest objects. With "compact devices" the generator and lamp head are combined in one housing, with many light shapers the flash tubes are an integral part of the light shaper.

With modern flash systems, the amount of light , color temperature and burn-off time can be individually regulated. The electrical energy stored in the capacitors can be stored for several weeks. Opening flash generators and compact devices is therefore not without risk. With more modern studio flash systems, the capacitors are discharged via high-performance resistors after switching off. The same applies if the flash output is reduced.