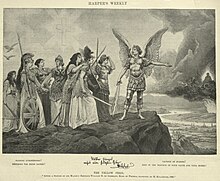 Peoples of Europe, preserve your most sacred goods , painting from 1895

"The Yellow Terror In All His Glory" , American illustration from 1899

Yellow Peril is a pejorative from the colonial period with which the USA and the European colonial powers tried to stir up resentment against East Asian peoples , especially against China .

The “creator” of the French pejorative was probably the Russian-born sociologist Jacques Novikow with his essay Le péril jaune from 1897. A similar warning is provided by Hermann Knackfuß's painting Peoples of Europe, preserve yours , made in 1895 based on sketches by the German Emperor Wilhelm II most sacred goods , on which a Buddha can be seen floating on a gloomy thundercloud from the east , who is observed by the personifications of the European nations ( Marianne , Germania , Italia , Britannia etc.). Behind this is also a subliminal recognition of the potential of East Asia, which at the turn of the 20th century was trusted to break the European-North American world power.

In English, the term was coined by a series of weekly short stories by Matthew Phipps Shiel , which were published in 1898 under the title The Yellow Danger and in later editions received the title The Yellow Peril , a term that is still used in English today. Shiel, who was discriminated against because of his mulatto origins , gave free rein to his anti-Chinese feelings and gained great fame. The occasion was the murder of missionaries in Kiau-Tschou in 1897 , which led to the stationing of protection troops in China. In 1899, with the outbreak of the Boxer Rebellion , and in 1905, when a Far Eastern power defeated a European one for the first time in the Japanese-Russian War , the term became more widespread.

In German, the term probably goes back to the writer Stefan von Kotze and his book The Yellow Peril (around 1900).

In the 1980s, when Japan or the tiger states seemed to take over economic dominance, the term came into use in the USA and before that in the FRG as a negative designation for Mao Zedong's China .

Another form of Western fears can be found in Samuel P. Huntington , who in his controversial book Clash of Cultures addresses the impending confrontations between the West and China.

" Yellow Peril" is also the nickname of a yellow sculpture by the sculptor Ron Robertson-Swann , which was erected in Melbourne , Australia in 1980 . The actual name is "Vault". Initially, the nickname was used by opponents of this sculpture, today it has established itself.

The last biplane in the US Navy, the Naval Aircraft Factory N3N , was also called Yellow Peril because of its yellow covering .

In railway jargon, the term “yellow danger” is jokingly used for construction vehicles because of their yellow paintwork. During construction work, rail operations often deviate from regular operations, which involves particular dangers.