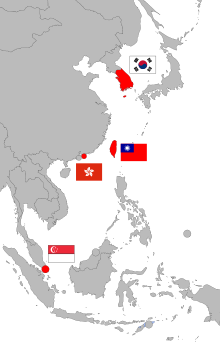 Tiger states collectively refer to South Korea , Singapore , Taiwan and Hong Kong . These four Southeast Asian economies are literally referred to in the Chinese-speaking economic areas as the "Four Little Dragons of Asia" ( Chinese  亞洲 四小龍  /  亚洲 四小龙 , Pinyin Yàzhōu sì xiǎolóng ); This term has also become common in Korean , Japanese and French . The term, coined in the 1980s, indicates that these economies rose from developing countries to industrialized countries thanks to high economic growth . The name is based on the powerful energy of a tiger about to jump, to indicate the high dynamic of the economic boom.

The term "tiger states" is occasionally used for the 13 states on whose national territory there are still residual tiger populations . 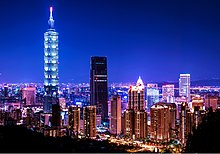 The economic development can be broken down into phases: In the initial stage, the states were economically underdeveloped. B. raw material poverty , low agricultural usability and high illiteracy rate , and were therefore dependent on the import of industrial products. In order to end this deficiency, a policy of import-substituting industrialization was pursued by attracting light industry , which was mainly interested in low wages, poor worker protection and the absence of trade unions . A business-friendly economic policy, with special economic zones and open cities, favored low-cost production. During this time the development from an agricultural to an industrial state took place , similar to the structural change within the 3-sector model of the economic approach, even if the social conditions improved only slightly or even deteriorated.

This phase was followed by a depression of the economy in the 1990s, which was due to the loss of the previous location advantages due to the emergence of trade unions and the associated social demands or comparable - or even more favorable - economic conditions in neighboring countries. The response to this crisis was the development of modern industry, which is no longer founded by foreign investors . This modern economy now offered higher wages while at the same time providing social security and in many cases brought about growth in the service sector . Investing and building universities, opening up to international trade, and political stability are crucial to building a modern industry. In South Korea, Taiwan and, to a limited extent, Hong Kong, the political system was democratized during this phase.

The withdrawal of speculative funds in Thailand and later in Malaysia , South Korea , Indonesia and the Philippines led to the Asian crisis in 1997, which also hit the tiger states hard.

In the tiger states, first of all a low-wage industry developed and later almost exclusively the high-tech industry, which amounts to a monoculture , which in turn entails risks in the face of crises. In addition, dependencies on a few raw material and sales markets can quickly arise.

Industry is also growing almost exclusively in the cities, which is why the rural population is migrating to the cities ( rural exodus ). The reaction was to build numerous relief and residential towns, most of which were planned and built by the state. A case in point is the Sha Tin district in Hong Kong, where a residential town for more than half a million people has been built.

The high population growth in the cities up to the 1990s put a heavy strain on the infrastructure. At the moment the population development in the large states of South Korea and Taiwan is characterized by the increasing importance of the capital. Sudogwon , the Seoul metropolitan area, is the second largest metropolitan area in the world. Almost half of all South Koreans live in and around the capital. About a third of all Taiwanese live in the Taipei metropolitan area . In contrast, rural areas are already suffering from high levels of migration. What makes this so explosive is the simultaneous natural decline in population in these areas, which has started since the 2000s. Meanwhile, many other centers such as Kaohsiung and Busan are also suffering from population loss. In addition, many East and Southeast Asian provincial cities did not even have subway networks until the 1990s , while the capital cities or financial centers had very dense and highly developed networks.

One problem affecting the four tiger states is a sharp drop in the birth rate since the 1990s. In 2005, the fertility rates were 0.96 in Hong Kong, 1.08 in South Korea, 1.12 in Taiwan and 1.25 children per woman in Singapore. It is therefore predicted that the population will decline over the next few decades. At the same time, the number of old people is increasing faster than anywhere else in the world. If this trend continues, the tiger states will face even greater demographic problems than the western European states. In contrast to the territorial states, the city states Singapore and Hong Kong would still be able to compensate for these problems through immigration. Since society in Taiwan and especially in South Korea is highly homogeneous, it is questionable whether there will be increased immigration.

Explanation of the development phases

The flying goose model is a model of the economic development of some countries in Asia, especially the tiger states. These Asian countries are compared with the flight behavior of the flying geese: like the geese, one country, in this case Japan , led the other flying geese . The economic success of these fellow pilots then developed in line with the lead goose.

The following time sequence is typical:

Other states or economic areas with a similar development have meanwhile been given, for example, the term panther states , which are based on it.

The tiger states (red) next to the panther states (yellow)

After the rapid economic rise of the tiger states in the 1980s and 1990s, these panther states - Indonesia , Malaysia , Thailand , the Philippines and Vietnam - were given opportunities for the same development. However, the Asian crisis in 1997 slowed its upswing so much that none of the countries has so far been able to make the full leap into an industrialized country.