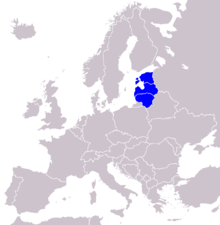 The Baltic States in Europe. From north to south: Estonia, Latvia, Lithuania

The Baltic states are three states located in Northeastern Europe (listing from north to south):

After the First World War, the Baltic states became independent from the then Russian Empire , but were annexed by the Soviet Union in 1940 and only regained their independence in 1991.

This German concept formation has its origin in the German east settlement of the Middle Ages . Although Russia exercised the dominant political power in its Baltic Sea provinces and former areas of Sweden and Poland-Lithuania since the 18th century , it could not prevent the German-speaking population from developing as a kind of upper class. This was also the economically and socially dominant population group until the end of the First World War. In addition, the Russian, indigenous and Jewish population groups populated these countries in the Baltic States .

When the region was occupied by German troops during World War I, all influences of the Russian October Revolution of 1917 were consistently suppressed in the three Baltic states.

The Brest-Litovsk peace treaty also brought political independence to the Baltic states. The German upper class initially continued to dominate. Only with the final defeat of Germany in 1918 did full state administration pass to the majority of the population of the states. In 1919, however, they were only able to defend themselves against the attack of the Soviet Russian troops with the help of the German Freikorps (so-called Baltic Division ) under General Rüdiger Graf von der Goltz . After the governments initially distrusted, close anti-Soviet cooperation between the German and Estonian secret services developed, particularly in Estonia.

This long-term cooperation was ended by the Hitler-Stalin Pact of August 1939 by the German side, since the definition of spheres of interest by the Soviet Union and Germany left the Baltic states to the Soviet sphere of influence.

With the slogan “ Heim ins Reich ” at the turn of the year 1939/40, the German population was initially moved to the province of Posen and later to the heartland. A large part of the Brandenburg Division , which was used for special tasks , was later made up of these ranks within the Wehrmacht , due to its excellent knowledge of Russian.

In the spring of 1940 the Red Army occupied the three Baltic states. Parts of the population were sent to the interior of the Soviet Union and to labor camps in mass deportations . The onset of Russification was interrupted in the summer of 1941 by the German attack on the Soviet Union . Due to the prevailing anti-Soviet mood, parts of the population initially welcomed the German troop units and were subsequently willing to cooperate. Above all, the Jewish population of the Baltic states was almost completely deported by the Nazi mass murder until 1944/45 and was murdered mainly in Germany-occupied Poland , partly with the help of the Baltic population. The Waffen-SS recruited soldiers from local opponents of the Soviet Union . However, it was clear to many that only one occupation had given way to another. After the Soviet Army retook the three states, Stalin took cruel retaliation against the population and carried out Russification on a larger scale than before.

The resistance by underground organizations, v. a. so-called forest brothers , although it lasted for a few years after the renewed occupation by the Red Army. After the Second World War, British and US command companies initially tried to support these underground fighters with the help of former German Navy soldiers and ships they had taken over and later took some relatives out of the country. From 1952 the resistance was weakened by better knowledge of the Soviet authorities and after the death of Stalin was largely liquidated by an amnesty.

The three Baltic states did not take part in the founding of the CIS in December 1991 , as they did not refer to the tradition of the three Soviet republics founded in 1940, but understood it as a continuation of the states that became independent in 1918-20. They had therefore all declared the restoration of their independence in the course of the previous year.

The Baltic states have been members of the European Union and NATO since 2004 .