Swivel blades are wings whose sweep can be changed by a swivel mechanism. 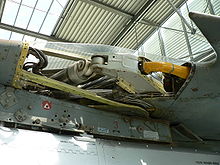 Swivel mechanism of a MiG-23 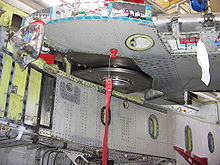 Axis of the swivel mechanism of a tornado

Depending on the design, either the entire wing or only parts of the wing are pivoted. The aerodynamic drag and the buoyancy of the structure can be adapted to the respective flight speed and operating conditions. At low speed or during take-off and landing, the surfaces are set to a low sweep, which means that high lift can be generated despite the low speed. Take-off and landing speeds can be reduced and maneuverability in slow flight is also improved. During fast flight, the sweep is increased, which reduces the air resistance of the aircraft and thus enables greater speed and range.

The sweep is only the most obvious part. From an aerodynamic point of view, it is particularly important that the wing extension and the profile depth can also be changed by pivoting . The latter arises from the fact that the profile chord is lengthened by pivoting back (viewed in the direction of flow) while maintaining the same thickness of the wing .

A special form of the swivel wing is the oblique wing concept, in which a continuous wing is swiveled around a central pivot point. Tilt rotor aircraft, which instead of the rotor nacelle can pivot the entire wing upwards (e.g. the Hiller X-18 ), are also often referred to as tilt-wing aircraft. The correct name for this is tilt wing aircraft .

The swivel- wing wing should also not be confused with the gull wing ("seagull wing") and the foldable wings of carrier aircraft , which are used to save space on the decks of aircraft carriers.

Today, the prototype of the Messerschmitt P.1101 is considered to be the first swivel-wing aircraft , the wings of which were adjustable on the ground in a range of 35 ° -45 °. After the aircraft fell into American hands as spoils of war towards the end of the Second World War , the Bell X-5 was developed on the basis of this aircraft , which had swivel wings that could be adjusted in flight.

Swivel wings offer advantages when high demands on slow flight behavior, runway length, payload capacity and, at the same time, on flight at very high speeds ( supersonic capability , e.g. when penetrating the enemy airspace or during interception maneuvers) are to be combined in one airframe. Disadvantages arise compared to fixed wing constructions due to the increased curb weight and the complexity of the swivel mechanism.

The advent of relaxed stability control systems in the 1970s eliminated many of the disadvantages of fixed wing systems. No new swing-wing aircraft has been built since the Tupolev Tu-160 , but it is noteworthy that the successor system to the Grumman F-14 - the F / A-18E / F - has a reduced payload / range capability due to its small fixed wing.

With the North American XB-70 the wings - more precisely: the wing tips - were not swiveled horizontally, but vertically. From about Mach 1.8, both wing tips were folded down to a maximum of 65 °.