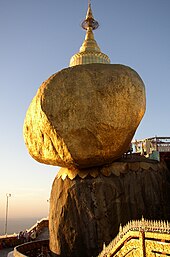 The Golden rock ( burmese Kyaiktiyo , MLCT: kyuik hti: yu: , ကျိုက်ထီးရိုး ဘုရား , IPA : [ tʃaiʔtʰíjóʊ ]) is one of the most sacred Buddhist sites in Myanmar .

Pilgrims camp on a plateau not far from the pagoda

Praying pilgrims opposite the rock

The Golden Rock is located on a mountain near the town of Kyaikto in Mon state . It is considered a place of pilgrimage (peak time November to March) for Buddhists and also an important tourist destination.

The site has a complex geological structure. The 1,102 meter high dome on which the Golden Rock lies consists of a volcanic hard rock ( basalt ) that is blended with metamorphic rocks and older rocks from the Carboniferous . The ridges are ground off and indicate an overprinting since the Paleozoic . Since then, the Sittoung River has also cut into the area. The elevations lie on the border with the fertile plains, which are particularly favorable to agriculture due to the sedimentation of the rivers and the annual rainfall during the monsoon season . The adjacent hills are forested and are used for shifting cultivation. Due to Schwendbau, there is hardly any primary forest left .

According to legend, the rock is only kept in balance by two Buddha's hairs so that it does not fall off. An old hermit is said to have received a hair relic from Buddha himself, which he always kept in his topknot. Shortly before his death, he wanted to have a pagoda built on a boulder for the relic , which was exactly like his skull. With the help of the king, he searched the seabed for such a rock. When he finally found it, he took it up the mountain, where it still stands on the precipice today. 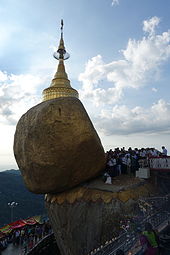 The golden rock has the rough shape of a human skull , but without exact details. There is a stupa on the rock , the 5.5 meter long Kyaiktiyo Pagoda . Under the pagoda is said to be the hair, which is protected by a reliquary. The rock has a coating of gold leaf . The pilgrims bring gold leaf which they stick to the sacred rock. It is gold-plated up to a height of about two meters. Women are not allowed to touch the sanctuary. The stupa is crowned by a hti .

The 5.5 meter high golden rock is made of granite . Its character goes back to a form of chemical weathering that occurs under tropical conditions, which occurs mainly in granites and is known as wool sack weathering . The weathering attacks the original rock, especially in the existing fissures, which leads to a breakdown of the weathered rock mass into individual blocks.