Presses are metal forming machines with a straight relative movement of the tools .

There are many ways to classify presses. However, the most important classification criteria for presses should be those according to which one can derive the usefulness of presses for certain tasks. Since the term “press” is also extensive in technology , it should be specified more precisely. There are z. B. Devices are used to close and hold tools, which are consequently called "clamping units" and are used in plastic injection molding technology. In principle, however, these are nothing more than presses that only remain in their working point for a long time. Furthermore, hammers or hammer mills in the broadest sense can also be counted among the presses if they are used, for. B. used in forging . At least in both cases a smooth transition from one to the other can be observed.

A number of production processes from the main production groups according to DIN 8580 ( primary forming , forming , joining , coating , cutting and changing material properties ) can be carried out in presses . examples for this are

This multitude of basic fields of activity alone shows how diverse the functions of presses in technology must be.

The maximum press force that should be effective at the operating point is also an important criterion. The size of such a press is of course based on this. However, there are types of presses which, due to the underlying physics, can generate an almost infinite press force, regardless of the driving force. These types of presses are capable of self-destruction and must be protected against this by means of overload protection methods. All eccentric presses, crank presses and toggle presses should be mentioned here.

A very important distinguishing criterion is the accessibility and also the rigidity of the respective press type. Relatively open press frame designs allow very good access to the work area. However, this open design reduces the rigidity of the presses and springing back (elastic deformation ) can easily lead to this design not being allowed to be selected.

The working speed of a press depends on the type of press. A hydraulic press can have a nearly constant and often even controllable working speed over the entire stroke. Eccentric and crank presses show a very low working speed in their dead centers , i.e. in the highest reversal point OT and at the very bottom in the working point BDC . Since z. B. the deep drawing of components may only be done at speeds that are not too high, only a few types of press can be used for this process.

If you look at eccentric and crank presses, you have to find that these types of press are only sufficiently powerful about 30 ° before BDC. As a result, with these two types of press, the working stroke must be at least 15 times as large as the travel that is required. Furthermore, the ability of these two types of press to be used in continuous stroke is limited. It must be avoided that a press comes to a standstill after a few strokes in use. One speaks of the work capacity with continuous stroke. The respective work capacity must of course be greater than the work requirement, which depends on the respective work process.

Since presses have to be used quickly with a continuous stroke of up to 600 strokes per minute with some cutting tools, it is precisely these that must be able to be disengaged very quickly; H. the drive must be taken out of service as soon as possible. This cannot be done by braking, as the overrun takes several strokes. Tool systems of this type are monitored electronically and an error that can lead to the destruction of the tool is converted directly into an actuating command that disengages the clutch.

Depending on the type of power and energy supply, presses can be divided into three different categories.

In the case of path-bound presses, the path of the machine ram ( bear ) is determined by the kinematics of the main gearbox of the machine. The press is driven by an electric motor that drives a flywheel. This flywheel transfers the energy to the main transmission via a clutch / brake combination. Most of the energy required for one work cycle is covered by the energy of the flywheel. Distance-bound presses are designed according to DIN so that the nominal force is applied at a crank angle of 30 ° before bottom dead center (BDC). The further you move in the direction of 0 ° crank angle, the greater the available force. Since at a crank angle of 0 ° the force could increase practically over all limits, these machines need an overload protection. Depending on the type of main transmission, further distinctions can be made. A distinction is made there between presses with cam gears and presses with crank gears. However, machines with crank drives are of greater technical importance. 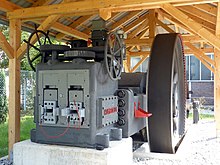 Cam gears are of very little importance in press construction. They are only used for small presses with low nominal forces. However, almost any desired force-displacement curve can be displayed with them.

This is the oldest type of press. It was developed and used first. The working capacity of this type of machine depends only on the mass and the speed at which the mass hits the workpiece. All of the stored energy is fully implemented during each work cycle. The specific parameter of the work-related machine is its work energy, which is stored in the machine at the beginning of the forming operation.

Force-bound presses work today according to the hydrostatic principle. Precursors are e.g. B. Wedge Presses . In hydrostatic presses, the energy stored in the pressure medium is converted into mechanical energy with the help of cylinders. Just like presses that are tied to a path, these machines also need overload protection to prevent damage to the machine. Another distinguishing feature is the type of drive.

With this type of drive, the pump must be designed for the greatest possible power requirement of the press. As a result, very powerful pumps are required to drive these presses. Because of the advancing automation and the associated increase in the number of strokes, more and more presses are being equipped with direct pump drives.

In contrast to the direct pump drive, accumulators are used here to store pressure. As a result, the pump only needs to be designed for an average output. Another advantage of this accumulator is the dampening of pressure peaks in the system. 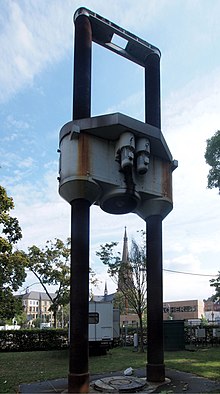 Unlike C-frames, this frame shape is suitable for presses of all sizes. A distinction can be made here between frames in two-column design and frames in column design. In the first form, the frame consists of a single cast block. Column frames are usually made in several parts and are prestressed using tie rods. These tie rods prevent gaps from occurring between the individual components as a result of the tensile load on the frame during the forming process.

The frames are made of different materials. In the past, frames were mostly made of gray cast iron or cast steel. In the recent past, more and more presses with welded sheet steel construction have been used. In addition to the advantages of high vibration damping and good casting properties, gray cast iron has the major disadvantages of a low modulus of elasticity and low wear resistance. In contrast, cast steel has a significantly higher modulus of elasticity. However, the machining of cast steel is much more complex than that of gray cast iron. However, welded constructions made of sheet steel offer the highest modulus of elasticity and thus the highest stiffness. However, these in turn have only low damping properties and usually require ribbing in order to achieve maximum rigidity. Due to the use of steel, steel frames have the unpleasant property of not dampening vibrations sufficiently. In the case of casting frames of certain types of cast iron (gray cast iron e.g. EN-GJL300, formerly GG 30, spheroidal graphite cast iron e.g. EN-GJS500, formerly GGG 50), the low tensile strength that can be observed with these materials can be compensated by that the frames are pretensioned using steel tie rods. These are rods with a sufficient cross-section, which are to be regarded as very large screws and which are guided through the bars of the press. They must be tightened firmly when the press is not under load. The load-bearing components of the press frame are therefore under compressive stress in the unloaded state. The above Cast grades can tolerate compressive stresses sufficiently well. When the press is working, the resulting workforce partially or completely relieves the compressive stress. This means that cast racks can also be built into presses. The low wear resistance of cast racks is counteracted by the fact that all leading surfaces are created by suitably hardened steel rails that are connected to the frame.

For commercially used power-operated presses in Germany, an annual safety check according to UVV test (according to guidelines of the employers' liability insurance association) in connection with the VDE regulations is required. Wearing protective goggles during commercial operation is a prerequisite for proper operation.

The accident prevention regulations (protective grille, two-hand operation, light curtains and the like) have been continuously developed and specified over the decades. This has significantly reduced the number of accidents with presses.