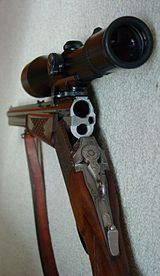 The buck treble is a long weapon for hunting purposes with three barrels arranged one above the other.

As a rule, the shot barrel is arranged at the top so that a running rail can be used for sighting when shooting a quick shot. A rifle barrel has a large caliber for shooting strong game. The second barrel has a smaller caliber for shooting small game. Triumphbock is the name of a barrel arrangement in which the smaller ball barrel is to the side next to the other barrels of the triplet that are vertically stacked (jacked up) (see illustration).

The large-caliber barrel is firmly aligned for the shot barrel. The small barrel can be adjusted to a common point of contact compared to the large barrel.

The over and under triple rifle is a break-open rifle , which means that the barrel assembly is bent in relation to the receiver for loading or unloading . He is one of the single-shot weapons .