The Desert Eagle is a semi-automatic single-action - gun based on the principle of a gas-operated with rotary bolt head is based. It was developed by Magnum Research (USA); IMI ( Israel Military Industries ) initially took over production from 1985 . The weapon has been available in .50 AE caliber since 1990. From 1995 to 1998 it was manufactured by Saco Defense (USA), since then IMI (Israel Military Industries) has been the manufacturer.

IMI no longer produces Desert Eagle pistols for the civilian market; this is now served exclusively by Magnum Research .

The Desert Eagles from Israeli manufacture are in demand among connoisseurs today, as their polygonal barrels have the reputation of being more precise than those of the pistols from US manufacture. At the finish, however, Israeli Desert Eagles require a lot of care and must be stored completely oiled, otherwise even fingerprints will form brown "prints" after a short time. This is due to the fact that IMI burnished the weapons from their production without carefully polishing the surface again. The coating, which is quite coarse-pored compared to the US variants, absorbs aggressive hand sweat particularly intensively, which can cause it. a. also makes it very susceptible to rust film, which can be easily removed with a rag soaked in gun oil. d. Usually can be easily removed again.

IMI produced the Desert Eagle exclusively in black, while Magnum Research offered models in a wide variety of colors and coatings very early on.

There are three different versions of the Desert Eagle: Mark I, Mark VII and Mark XIX. The Mark I and VII are no longer in production. The Mark I was produced in calibers .357 Magnum and .44 Magnum , and the Mark VII also in .41 Magnum. The most commonly used Mark XIX comes in .357 Magnum, .44 Magnum, and .50 Action Express . A version in .440 CorBon was also offered, but its production, like that of the .41 Magnum, was discontinued after low production numbers. In the special caliber .357 / 44 Bain & Davis, only 1000 pieces were produced from 1989. By exchanging the barrel, magazine, slide or rotating head lock and recoil spring, all available calibers can be fired with one weapon. The usual barrel length is six inches, but ten and fourteen inch barrels are also available, all variants are polygonal barrels .

The Desert Eagle is loaded with a removable magazine, as is common with other modern self-loading pistols. Because of the size of the cartridges, the magazines are in a row, which increases their capacity compared to weapons such as guns. B. the SIG Sauer P226 (caliber 9 × 19 mm , 15 cartridges) is very limited. The magazine capacity is 9 cartridges for .357 Magnum caliber, 8 cartridges for .44 Magnum caliber and 7 cartridges for .50 AE (Action Express) caliber . In Europe, Magnum Research is represented by Waffen Ferkinghoff GmbH & Co. KG.

The Desert Eagle is suitable for sporting purposes and for hunting. In Germany it is used for hunting as a catch gun . Because of its size and bulk, it is often used in films and is available for selection in many computer games, which made it famous beyond the gun scene. As an actual service weapon, however, it is hardly ever used. The reasons are the weight, the high price of the weapon and ammunition, the small magazine capacity, the impractical size for such purposes and the lower reliability resulting from the complex structure than with other pistols.

All Desert Eagle versions use the same handle. It is therefore possible to use the complete exchange system consisting of the barrel and complete breech of a Desert Eagle Mk XIX on the handle of a Mk VII or Mk I or vice versa. The locking heads of the Mk XIX are not interchangeable with those of the Mk I or Mk VII. 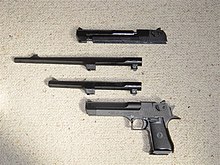 These pistols are largely identical. Barrels and locks are interchangeable. The most important difference to the MK XIX when changing the caliber from .357 Magnum to .41 Magnum / .44 Magnum is that, unlike the Mk XIX, a completely new bolt is required and it is not enough to just change the bolt head and barrel . When changing from .41 Magnum to .44 Magnum, it is sufficient to exchange the barrel and bolt head.

The available barrel lengths were 6 ", 10" and 14 "for .357 Magnum and .44 Magnum. Only 6-inch and 10-inch barrels are known for the .41 Magnum. However, not all configurations are available anymore and the support from the manufacturer continues to decline. All Mk-I and Mk-VII barrels have a 3/8-inch dovetail to accommodate optical sights. 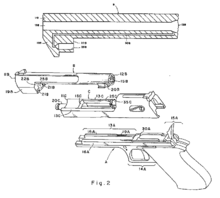 In contrast to the Mk I or Mk VII, all that is required for any change in caliber is a different barrel and possibly a bolt head. However, the calibers .44 Magnum, .440 Corbon and .50 AE use the same bolt head. The locks themselves are wider and more massive than those of the Mk I or Mk VII and are not interchangeable with the locks of the Mk I and Mk VII, which is also the case with the wider 7/8 inch dovetail with two crossbars to accommodate optical target devices corresponds. The barrels are available in 6 "or 10" barrel lengths.