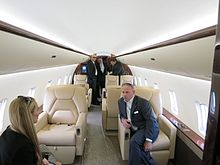 Interior of a Challenger 850

The first flight of the Challenger 850 took place in August 2006 at Lufthansa Technik , the other acceptance flights took place during the following six months. The date for the first delivery to a customer was planned for December 2006.

The Challenger 850 family also includes a version called the corporate shuttle, i.e. an equipment variant for corporate or social transport. This variant, which is equipped by Bombardier itself, was also delivered for the first time in 2006.

List of aircraft types from the manufacturers Bombardier Aerospace and Canadair