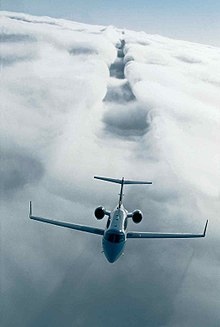 A Learjet 45 of the Irish Defense Forces makes a trail in the cloud cover.

The Learjet 45 is a business jet produced by the Canadian aircraft manufacturer Bombardier . It is the first completely new aircraft of Learjet since William P. Lear's first model 23 .

A Learjet version with increased take-off mass and range has the designation 45 XR .

Bombardier announced the start of development of the Learjet 45 in September 1992. The first flight took place on October 7, 1995. On 22 September 1997, the aircraft was finally by the US aviation authority FAA approved. The first delivery followed in January 1998.

Although it looks similar, it has only 50 percent of the components in common with the Learjet 35 model . The aim of the development was to achieve the performance of the Learjet 35, the handling of the Learjet 31A and on top of that a more spacious cabin than the competition. The aircraft has an EFIS from Honeywell , digital engine control ( DEEC ) and an APU in the basic configuration .

In June 2004 the Learjet 45XR was presented. This revised version is characterized by a higher take-off weight, a greater range, a higher cruising speed and a higher rate of climb. The innovations were achieved through revised engines.

The construction of the Learjet is a project in which many companies are involved. The final assembly was in the USA (Wichita) at Learjet, the company Short Brothers in Ireland built the fuselage and the Canadian company de Havilland Aircraft Company was responsible for the design and construction of the wings . All companies belong to the Bombardier group of companies. In 2012, Bombardier introduced the successor models to the Learjet 40XR and 45XR as the Learjet 70 and 75.