Lufthansa CityLine is a German airline based in Munich and based at Munich Airport . It is a subsidiary of the Lufthansa Group and operates feeder flights on behalf of Lufthansa , mostly under the brand names Lufthansa and Lufthansa Regional , an umbrella brand for regional airlines that operate regional and feeder flights for Lufthansa. From November 2015 to March 2020 Lufthansa CityLine also operated long-haul flights for Lufthansa. For this purpose, Airbus aircraft of the type Airbus A340-300 were taken over, which were converted to 300 seats and repainted in a Star Alliance livery without Lufthansa lettering. Due to the Covid-19 pandemic , the long-haul operation was stopped prematurely.

In 1970 the Seebäder-Flugdienst was renamed Ostfriesische Lufttaxi GmbH (OLT) . The shareholders were the stock corporation for industry and transport (AGIV) in Frankfurt am Main and the shipping company Fisser & van Doornum . AGIV took over the shares of Fisser & van Doornum in 1973 and thus became the sole shareholder of OLT. For the first time, OLT operated its own aircraft, a twenty-seat de Havilland Canada DHC-6 . In 1974 the seaside resort was separated from regional air traffic and the Ostfriesische Lufttaxi GmbH was transferred to the Deutsche Luftverkehrsgesellschaft mbH (DLT) for regional flights. The OLT Express was re-established. This makes Lufthansa CityLine the direct successor company to OLT, which was founded in 1958.

In 1977 a 30-seater Short 330 was used for the first time . A year later, the first international connections of the DLT were opened: Bremen – Copenhagen and Hanover – Amsterdam. Both routes were operated on behalf of Lufthansa . In the same year it agreed with AGIV to acquire 26 percent of the share capital of DLT, which amounted to 6 million German marks . In 1979, the domestic German route network of DLT was expanded in cooperation with Deutsche Lufthansa AG. 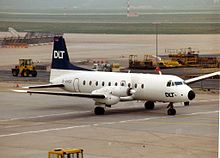 In 1980, both partners increased the company capital of DLT to 16 million German marks. In the following year the first of later six machines of the 44-seater type Hawker Siddeley HS-748 flew on the routes of the DLT. In 1984 most of the DLT flights were carried out under LH flight numbers on behalf of Lufthansa. In the same year, the last of the former six Short 330s was retired.

The company's capital was increased to 40 million German marks in 1985 (AGIV held 60 percent, Deutsche Lufthansa AG 40 percent). In 1986 the first Embraer EMB 120 with 28 seats joined the DLT fleet. In 1987, DLT was the first airline in Europe to operate the Fokker 50 in its fleet. In the same year, DLT founded the AERO Services GmbH subsidiary for engine maintenance , based in Alzey . In 1988, for the first time, all DLT flights were operated under LH flight numbers on behalf of Lufthansa. In 1989 Lufthansa increased its capital stake by 52 percent to 50 million German marks and thus became the majority shareholder in DLT.

Fokker 50 of Lufthansa CityLine in the early 1990s

Avro RJ85 from Lufthansa CityLine in 2000

Since 1990, on the basis of a cooperation agreement with Lufthansa, DLT has been run as an independent company with its own responsibility for results and planning authority. Within the Lufthansa Group, DLT was responsible for the organization of regional branch flights and feeder flights from smaller airports. For this purpose, DLT also commissioned regional airlines, e.g. B. Nürnberger Flugdienst , Contact Air and Cimber Air . DLT was the first airline worldwide to order the fifty-seat Canadair CRJ100 regional jet . The annual transport performance based on passengers exceeded the million mark for the first time.

In 1993, Lufthansa CityLine became a wholly-owned subsidiary of Deutsche Lufthansa AG. At the end of the year, the CRJ fleet comprised 13 machines. Lufthansa has been responsible for planning and marketing since then. From 1994 Lufthansa CityLine flew under the brand of the parent company, including aircraft painting, lettering and logo. As a new type of aircraft, the regional Avro RJ85 jet with three aircraft joined the Lufthansa CityLine fleet in October of that year . The Bombardier CRJ fleet increased by two more to a total of 15 machines. Additional CRJ100 and RJ85 were planned until 1995.

In 1997 Lufthansa CityLine was Europe's first regional airline with exclusively jet-powered aircraft (31 Bombardier CRJ100 and 18 Avro RJ85). On the 40th anniversary on October 28, 1998, Lufthansa CityLine acquired its 50th jet aircraft. In the same year, the administration moved to the new building at Cologne / Bonn Airport , so that all company departments were centralized there.

On March 14, 2000, Bombardier CRJ200s were purchased and, from July 1, 2001, the first seventy-seat CRJ700 was used in scheduled service. Since 2003 the flights have been marketed as " Lufthansa Regional ". On June 17, 2009 Lufthansa CityLine celebrated its 50th anniversary. In autumn 2009, the first came jet airplanes from Embraer fleet, which until then largest machines used in the City Line to replace to older and smaller aircraft. Due to collective bargaining conditions, these aircraft were initially flown with a different livery (“CityLine” logo). In the meantime, the first machines have been given the standard painting with large lettering "Lufthansa Regional" and the Lufthansa logo on the tail unit as well as the addition "operated by Lufthansa CityLine".

On August 27, 2012, Lufthansa CityLine retired its last Avro RJ85 after having operated this type for 18 years. The administration had moved from Cologne to Munich by the beginning of October 2014.

In October 2014 it was announced that all Bombardier CRJ700s would be phased out and sold by the end of 2015. In December 2014 Lufthansa decided to transfer up to eight Airbus A340-300s to Lufthansa CityLine under the JUMP project in order to be able to offer long-haul flights for the parent company from November 2015. For this purpose, the cabins of the A340-300 were converted to 298 seats and repainted with a Star Alliance paint scheme without Lufthansa lettering.

Since 2019, the airline has also been flying medium-haul A319-100 aircraft, which Lufthansa has taken over.

In the summer of 2020, Lufthansa CityLine returned the last A340-300 from the JUMP project to Lufthansa after long-haul flight operations had been prematurely terminated in March.

Lufthansa CityLine mainly operates feeder flights from European airports to the hubs in Frankfurt am Main and Munich . From September 2015 to March 2020, long-haul flights were also operated from Frankfurt.

As of July 2020, the Lufthansa CityLine fleet consists of 52 aircraft with an average age of 12.7 years: 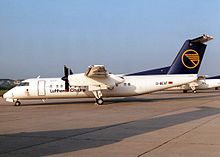 Lufthansa CityLine recorded an accident with fatalities in its history:

On January 6, 1993, a De Havilland DHC-8-311 crashed on Lufthansa flight 5634 ( flight number LH5634) . The aircraft of the Stuttgart airline Contact Air was used for Lufthansa CityLine, which in turn operated this scheduled flight from Bremen to Paris-Charles-de-Gaulle airport on behalf of Lufthansa . During Anflugs in Paris the released already for landing was Bahn was 27 (now 27 L) blocked the short term, so the pilots a swing-over maneuvers conducted to switch to the track 28 (now 26R). The machine was flown into the ground around 1.8 kilometers from this runway at 7:20 p.m. local time, killing 4 of the 19 occupants and the four-person crew surviving the crash.

Wikinews: Lufthansa  - in the news