The Embraer EMB 120 Brasilia is a 30-seat regional aircraft produced by the Brazilian aircraft manufacturer Embraer .

The Turboprops powered Embraer EMB 120 was developed in the early 1980s as a modern feeder aircraft with a pressurized cabin and is in direct competition with the Saab 340 . After the first flight on July 27, 1983, the model was first used in scheduled service in the USA in October 1985 . Up to autumn 2004 a total of 352 aircraft had been firmly ordered. In Germany, the EMB 120 was used by the DLT from 1986 . 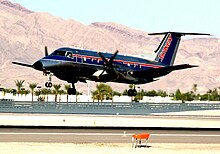