Contact Air Flugdienst GmbH & Co. KG , or Contact Air for short , was a German airline based in Filderstadt-Bernhausen and its technical base at Saarbrücken Airport . It was taken over by OLT Express Germany on September 1, 2012 and integrated into it. Up to this point in time she was still a member of the Lufthansa Regional group and served mainly domestic German and European destinations on behalf of Lufthansa and Swiss .

Gunther Eheim founded Contact Air in 1974 as a charter and business airline . The company was a 100% subsidiary of Eheim Verwaltungs GmbH based in Deizisau . Gunther Eheim was also the founder and managing director of the manufacturer of aquarium accessories Eheim GmbH & Co. KG, which has existed since 1949 . He died on February 3, 2013.

Passenger and ambulance flights were carried out in Europe, North Africa and the Middle East with a Dassault Falcon 20 and several Learjets . In 1982, BAe Jetstream 31 and Beechcraft 200 turboprop aircraft were purchased.

In 1983, the business flight division was transferred to the Stuttgart flight service, at the same time the first charter contract for scheduled services was concluded with the Deutsche Luftverkehrsgesellschaft ( DLT , today's Lufthansa CityLine ). The route Saarbrücken - Düsseldorf was operated on behalf of the DLT, and its own scheduled flights were carried out between Münster / Osnabrück , Stuttgart and Munich . In 1987 the fleet was supplemented by the De Havilland DHC-8-100 and -300. Contact Air's maintenance base has been located at Saarbrücken Airport since 1988 . 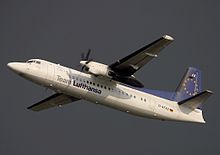 In 1996 Contact Air became a member of the then newly established Lufthansa regional network ; as a result, eleven Fokker 50s from Lufthansa CityLine were leased to replace the Dash-8.

In 2003, a total of nine ATR 42-500 were taken over by Eurowings . At the same time, the Fokker 50s were sold to customers in Iran, Indonesia, Iceland and Kenya. Since January 2004, Contact Air has offered flights under the Lufthansa Regional brand , which has replaced Team Lufthansa. In 2005, six ATR 72-500 from Eurowings were taken over and four ATR 42-500 were phased out. Since the beginning of the 2008 summer flight schedule, Contact Air has been using two Fokker 100s for Swiss that have the Star Alliance special paint scheme . Contact Air operated six other Fokker 100s for Lufthansa Regional.

However, OLT Express Germany also ceased operations in January 2013 - including the acquired parts of Contact Air. The Contact Air shipyard in Saarbrücken will continue to operate as Contact Air Technik GmbH.

At the time of the takeover by OLT Express Germany , the Contact Air fleet consisted of eight aircraft with an average age of 17.7 years: