Daniel Becke at the Germany Tour 2006 in Düsseldorf

Daniel Becke began cycling in 1989 at RSC Turbine Erfurt . He first developed into a successful track cyclist who became German champion several times, won world cup races, won the team pursuit title with the German national team at the 1999 and 2000 World Rail Championships and was Olympic champion in the same discipline in 2000 . At the Olympic Games, the German team also set a new world record in 3: 59.710 minutes. He was awarded the Silver Laurel Leaf for winning the gold medal at the 2000 Summer Olympics.

After his Olympic victory, Becke focused on road cycling and joined the Coast team in 2001 . He took part in the Tour de France 2003 as a helper to the later runner-up Jan Ullrich and finished the race on 145th. In 2004 he switched to the Spanish Illes Balears team and competed for them two more times on the tour: in 2004 he had to end the tour early. In 2005 , on the ninth stage, he crashed into a rock face at 57 km / h after misjudging a hairpin. He was still able to finish the tour in 152nd place.

In 2007, Becke called for an anti-doping law in a petition to the German Bundestag , as he felt that his fundamental rights to freedom of action and occupational freedom had been violated by the manipulation of the competition.

In September 2008 Daniel Becke ended his career as an active cyclist. 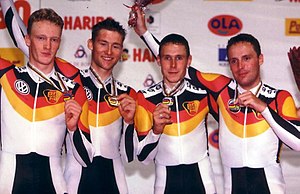 Becke (left) as vice world champion 1998 in the team pursuit, with Christian Lademann , Robert Bartko and Guido Fulst (from left to right)

The single pursuit for professionals was not consistently carried out at German track championships.

Before 1993 there were only championships for amateurs; previous results under German champions in team pursuit (amateurs)