This article or section needs to be revised: When " tidying up " the coherence of the article was partly lost.
Please help to improve it , and then remove this flag. 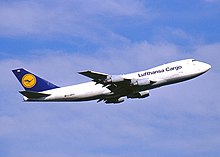 In 2005 Lufthansa Cargo withdrew its up to eight Boeing 747-200Fs at times . By mid-2008 Lufthansa used two further MD-11Fs and a 747-400F wet leased from World Airways . However, these leasing contracts have been terminated due to lower freight rates.

On October 28, 2007, at midnight, the Russian authorities issued an overflight ban vis-à-vis Lufthansa Cargo, apparently out of economic interests. Russia asked the German group to move its cargo hub from Astana Airport in the Republic of Kazakhstan to Jemeljanowo Airport in the Russian region of Krasnoyarsk (Siberia). In 2007 Lufthansa flew to Astana around 50 times a week. The Kazakh capital served as a stopover on the route to all of Asia. For the Russian cargo airline Aeroflot Cargo , which uses Frankfurt-Hahn Airport , a landing ban in Germany, which had been imposed by the German Federal Aviation Authority , was lifted after one day - apparently at the urging of the Rhineland-Palatinate Prime Minister Kurt Beck ( SPD ). In April 2008 Lufthansa Cargo and Jemeljanowo Airport agreed on a future collaboration.

In 2008, 46.7 percent of traffic revenue was generated in the Asia-Pacific region, followed by North America with 24.5 percent, Europe (11.9%), South America (8.7%), Africa (6.1%) and Middle East (2.1%). In October 2004, the Chinese cargo airline Jade Cargo International was founded in a joint venture between Shenzhen Airlines (51%), Lufthansa Cargo (25%) and DEG-Deutsche Investitions- und Entwicklungsgesellschaft mbH (24%) - until 2012. Flight operations began in August 2006. With this stake, Lufthansa Cargo has gained indirect access to the Asian air freight market. Lufthansa Cargo is also involved in the “International Cargo Center Shenzhen (ICCS)”, which was established in 2004.

AeroLogic , which went into operation in 2009, was founded at Leipzig / Halle Airport together with DHL .

To replace the aging MD-11, Lufthansa decided in March 2011 to buy five Boeing 777Fs , while options for five more machines were given. The first Boeing 777F ( aircraft registration D-ALFA ) was transferred from Everett near Seattle to Frankfurt am Main on November 9, 2013 . The 777F is 20 percent more economical than the MD-11 and significantly quieter.

On February 12, 2013, Karl Ulrich Garnadt, as CEO of Lufthansa Cargo, signed a cooperation agreement with “ Aktion Deutschland Hilft ”, an alliance of several aid organizations. In the event of a humanitarian or natural disaster, Lufthansa Cargo provides a cargo plane quickly and cheaply to fly relief supplies and operational material to the affected regions. This is intended to save the aid organizations in terms of costs and, above all, time. To reinforce the cooperation, Lufthansa Cargo has again provided the McDonnell Douglas MD-11F with the aircraft registration D-AICC with additional stickers.

With the start of the 2016/2017 winter flight schedule, the stopover in Siberia was moved from Krasnoyarsk to Novosibirsk. One reason for the relocation is that most flights over the Siberia route are now served by Boeing 777Fs that do not require a stopover. For the remaining flights with the McDonnell Douglas MD-11, maintaining a separate station in Krasnoyarsk had become too expensive, especially since all the necessary equipment is available in Novosibirsk and does not have to be kept in stock.

Lufthansa Cargo serves a route network with around 300 destinations on all five continents. In addition to the transport capacities of its own McDonnell Douglas MD-11 and Boeing 777 cargo aircraft, it also markets the cargo capacities of the more than 300 passenger aircraft (so-called belly capacities) of the Lufthansa Group and of Sunexpress aircraft .

Lufthansa Cargo's Boeing 777F in the livery that all aircraft had up to 2018, it has been gradually converted since then

As of April 2020, the Lufthansa Cargo fleet consists of 13 cargo aircraft with an average age of 12.4 years:

The central air freight hub of Lufthansa Cargo is Frankfurt am Main Airport , Europe's second largest freight airport after Paris-Charles de Gaulle . The airport operator Fraport and Lufthansa Cargo work closely together. Lufthansa Cargo is the main user of “CargoCity North” and has been trying for some time to gain a foothold in “CargoCity South”. This CargoCity South is of particular interest because the vast majority of international freight forwarders - the main air freight customers - are based there. These companies ensure networking by land and sea. There are different views between Fraport and Lufthansa Cargo regarding the night flight ban . With the application to expand airport capacities, Fraport saw itself prompted to apply for a ban on night flights for all planned flights so that the expansion could be politically agreed. In contrast, Lufthansa Cargo calls for a “practicable night flight regulation”. For this reason, there is interest in moving nightly cargo flights to another airport.

After the release of the new parallel runway 07L / 25R in the night of October 30th to 31st, 2011 and the associated ban on night flights between 11pm and 5am, Lufthansa Cargo relocated its flights, which normally start at night, to Cologne / Bonn Airport . With the changeover to the summer flight schedule on March 25, 2012, the flights are to be operated again from Frankfurt and start early enough so that they are no longer affected by the ban. A report by the logistics - Professor Richard Vahrenkamp , after which a shift of the entire cargo air traffic of Lufthansa to Frankfurt-Hahn airport in Hunsrück would be possible disagreed Lufthansa Cargo early December 2011th

Lufthansa Cargo was a founding member of the first strategic aviation alliance of the air freight company WOW . The alliance also includes Singapore Airlines Cargo , SAS Cargo and JAL Cargo . For reasons similar to those of the Star Alliance , a Lufthansa Cargo MD-11F ( aircraft registration D-ALCE ) flew in a WOW special livery until mid-2008 to advertise the logistics alliance worldwide. On all other machines, only different colored stickers indicate that they belong to the WOW. At the end of 2007 Lufthansa Cargo decided that the WOW logo, which had been on business papers (letterhead, business cards, etc.) until then, should no longer be used. In spring 2008, CEO Carsten Spohr declared that the air freight alliance had become largely superfluous due to its own dense route network. Accordingly, the WOW alliance will no longer be actively advertised and the lettering will be removed from the aircraft as part of the regular maintenance.

In April 2011 Lufthansa Cargo announced that a new freight pact based on the Star Alliance model was to be founded. Austrian Airlines' freight capacities have been integrated into Lufthansa Cargo's offering since 2010.

Lufthansa Cargo has been working with the Japanese airline ANA since September 2014 as part of a freight joint venture . A similar agreement was signed with United Cargo in December 2015 . Another cooperation was established with Cathay Pacific in May 2016, but the first shipments will not be sent out as part of the cooperation until the first quarter of 2017.

1 The business of cargo counts was completely taken over by Lufthansa Cargo at the beginning of 2009, the company thus dissolved.

The crashed VT-LCI in December 1998 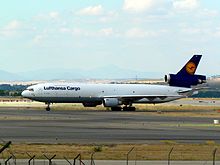 Lufthansa Cargo has recorded the following incidents in its history to date, some of which resulted in aircraft loss:

Airlines from Germany
Members of WOW