World Airways was a US passenger and cargo charter airline based in Peachtree City and based at Oakland Airport .

World Airways was founded in 1948 by Benjamin Pepper. With a Boeing 314 - flying boat one started charter flights from the US east coast. A year later, two Curtiss C-46s were purchased . In 1950 Edward Daly became the main owner of the company and over the next few years led it to one of the large and well-known charter companies. First, he procured Douglas DC-4 aircraft . In 1951 there was the first order from the US government; it was the basis for the US government contracts - which were important for the airline until the end. World Airways subsequently bought or leased the Douglas DC-6 and Lockheed 1049 Constellation . From 1960 onwards, World Airways took on more and more government contracts.

World Airways received the first Boeing 707 back in 1963 . With this, regular flights to and from Europe were introduced, but also flights to the Caribbean and South America . The Boeing 727 was also purchased later . In the early 1970s, the Douglas DC-8 was added to the fleet. With the Boeing 747 , of which World owned a total of three , scheduled flights to London were taken from Oakland , California , from May 1973 . At the same time DC-10 were procured.

During the Vietnam War , World Airways held a key position in the transport of troops for the US Army and their equipment from the US to Vietnam and back.

The line business was expanded with the introduction of the DC-10. The routes Hawaii - Los Angeles - Baltimore - London - Frankfurt am Main have been the cheapest flights to these destinations for many years. In 1988, World Airways - after restructuring - abruptly withdrew from the scheduled business. In future, World only flew charter flights.

In 1994, Malaysian Helicopter acquired approximately 25% of the capital and invested in the company.

From 1993 onwards, passengers were once again flown to Israel . Also, more and more charter flights were carried out according to their own flight plans. B. to Great Britain and other destinations in Europe. But these flights were also discontinued after the 1996 summer season with the intention of only undertaking ad hoc charter and cargo flights in the future.

During the 2nd Gulf War , during which World Airways again handled many troop transports, the airline - due to the profitable business with the military - was able to procure several MD-11 aircraft. In addition to Ramstein Air Base and Shannon Airport, World also uses Leipzig / Halle Airport for troop and material flights between North America and the Middle East . Civil airlines, such as World Airways, which operate for the US Department of Defense , typically use the callsign "Camber" (CMB).

In spring 2011, after more than 30 years of operation of this type of aircraft, the last McDonnell Douglas DC-10 from World Airways was retired.

As part of the bankruptcy to Chapter 11 of the parent company Global Aviation Holdings, the fleet of World Airways was halved to April 2012 for a restructuring of from 20 to 10 aircraft. As early as November 2013, however, both companies had to file for Chapter 11 bankruptcy again. In the course of this, World Airways also reduced its fleet from eight to three machines.

On March 27, 2014 World Airways announced the immediate cessation of all operations for economic reasons.

Further use of the name

An investment company from Miami acquired the naming rights in 2017 and wants to position the airline as a low-cost provider on long-haul flights with up to ten Boeing 777s or Boeing 787s to Asia and Latin America. The head of the new company is Ed Wegel, who was involved in the acquisition of the naming rights of Eastern Air Lines in 2011 , which were taken over by Swift Air in 2017 .

World Airways recently did not offer any scheduled flights. The main business of the company was as a service provider for the US Army , but private cargo and passenger flights were also carried out worldwide as charter on behalf of other airlines such as Air Canada , Sonair , Cargolux or UPS Airlines .

Fleet at the end of operations 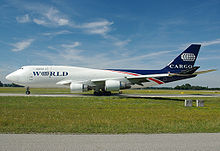 As of December 2013, the World Airways fleet consisted of four aircraft with an average age of around 21 years:

The following types of aircraft were also used before:

From 1960 to the end of operations in 2014, World Airways suffered four total write-downs of aircraft. In three of them, 88 people were killed. Example: