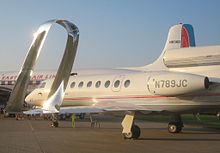 A spiroid (also: split-wing loop ) is a construction detail on the wings of an aircraft that is used to reduce the induced drag . It represents a further development of the winglet , which is still in the development stage, which has become increasingly widespread in recent years . Spiroids are one of the classic examples of bionics , i.e. the adoption of technical concepts from nature in technical research and development.

In contrast to winglets , which are only an extension of the wing angled by approx. 45 ° to 90 ° (depending on the design), spiroids are designed as a closed ring at the end of the wing.

Evolution from winglet to spiroid

The Bionics was able to show that multiple spreading of the wing tips lead in birds in improved flight performance of the wings. This leads to a reduction in the induced drag of the wing. The induced air resistance is created along the entire span by deflecting the airstream downwards in order to generate lift. In addition, due to the pressure difference between the top and bottom of the wing, there is also a lateral deflection. In contrast to the vertical deflection, however, it does not produce any lift, only tip vortices. It is therefore important to keep this useless lateral deflection low. The simplest implementation on aircraft wings initially led to the development of the winglets. By generating several small tip vortices, as in birds, the energy loss can be further reduced significantly. However, the number of winglets cannot be increased at will, since the frictional resistance would then be too great. The omission of the inner winglets then led to the development of the spiroids, which practically represent the envelope curve of the multi- winglets .

In initial tests, the shape of the spiroids promises a further fuel saving of around ten percent compared to previous winglets with even better flight characteristics, especially when climbing. The fuel saving is achieved by further reducing the wake vortices . The reduction in the wake vortices, which decisively limit the number of flight movements, also enables a shortened distance between aircraft taking off and landing and thus more intensive use of the existing runway capacities.